Dogs are renowned for their excellent sense of smell, and the Boone County Sheriff’s Office is using that trait to its advantage with the addition of two bloodhounds to its K-9 team.

BCSO Sgt. Ryan Musgrave said the idea to get the bloodhounds was inspired by Deputy Jake Pickett, a BCSO K-9 officer killed in the line of duty in March 2018.

“The reason we got the bloodhounds was to expand on Jake’s idea of an elite K-9 program,” Musgrave said. “He wanted to be able to provide as much help for the public as he could. He was very passionate and dedicated to make it what he thought was very beneficial to the public, so when Jake passed, we got a lot of support from the public, which allowed us to expand our K-9 program.”

Musgrave said when the department began researching bloodhounds for search and rescue, a Lebanon citizen recommended Find-M’ Friends, a Florida organization that promotes the benefits of bloodhounds and trains them to be placed with law enforcement agencies.

“They train their dogs and then donate them to police departments,” Musgrave said.

The bloodhounds have already proven their value.

“Det. Stewart was called out to a possible suicidal female and located her car in the middle of the county. It was unoccupied and she was believed to be in danger,” Musgrave said. “He was able to get her scent from the door handle of the vehicle when she shut the car door, and then tracked her a quarter of a mile and found her underneath a bush.”

Musgrave said the woman had taken some pills. She survived but might have died if not for the help of the K-9, Musgrave said.

Another call involved a male who ran away from Zionsville Community High School during the school day.

“Nobody knew where he went, so they called us there,” Musgrave said. “We were able to get the parents to go home and obtain an article of clothing and they brought it back and we were able to track him from the high school about a mile to a park where he was up on top of a hill, just sitting there.”

Although bloodhounds are often used in search and rescue cases missing persons with dementia or Alzheimer’s or missing children, they can be used in criminal cases, too, such as the recent case where a man was found murdered on the Rail Trail in Zionsville.

“(The bloodhounds) could even be used in very serious crimes,” Sheriff Mike Nielsen said. “If you want to see exactly where a suspect or victim has been, if you have that scent, you could track that. With technology the way it is today, while (the officer) is tracking, his body-worn camera device keeps track of GPS and you can lay that GPS layer on top of a map and we can see exactly where that dog has taken us. We are very excited about the opportunity that the bloodhound program will bring. Most importantly, I think it will save lives.” 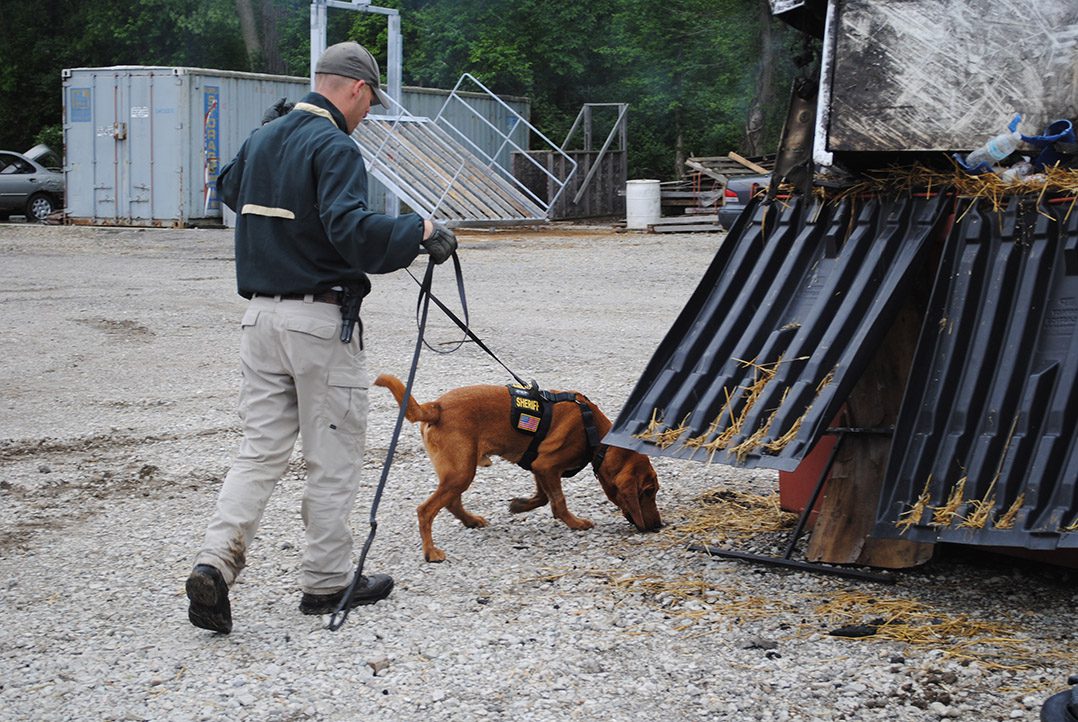 Sgt. Ryan Musgrave and his bloodhound, Chase, track a trail during training.

Connecting with the community

Besides search and rescue, the Boone County Sheriff’s Office bloodhounds serve another purpose, too.

“They’re very affectionate animals,” said BCSO Sgt. Ryan Musgrave, the K-9 handler for Chase. “It gives us that buffer between citizens and police because bloodhounds are so affectionate. They just want to cuddle and kiss anybody. (The public is) blown away by how friendly the dogs are.”