You are at:Home»Current in Westfield»Westfield Cover Stories»Finders Keepers: Westfield pilot places Hot Wheels cars around the world for Brooks Blackmore

Westfield UPS pilot Brian Evers recently returned from flying around the world and leaving behind Hot Wheels cars and paintings made by Brooks Blackmore, a 6-year-old Carmel resident who died from cancer. Paired with Brooks’ favorite toy and his painting is a summary of his story, statistics on pediatric cancer and a link to the Be Brooks Brave Fund.

In March 2019, Evers took an “Around the World Trip” and took Hot Wheels packages with him. He delivered the toy cars in Anchorage, Alaska; Osaka, Japan; Taipei, Taiwan; Dubai, UAE; and Cologne, Germany. After leaving three of the packages scattered in the Dubai mall, Brooks’ mom, Tracey Blackmore, was contacted by a boy from England, Fraser Cain, who had found the car in the mall. The Facebook post included a snippet about how touched the family was because the boys father had beat cancer in 2014.

Evers said he began his mission to do whatever he can to help the Blackmore family.

“I don’t know what it was. The actual deliveries of the cars and reading the cards (that tell Brooks’ story), it just, it hit me hard,” Evers said. “Ever since (the beginning), I have been doing everything I can to help the Blackmores.”

Since Evers’ began his mission, others have gotten involved, including his 7-year-old son, Henry. Henry and Evers shaved their heads at the June 1 St. Baldrick’s Foundation head-shaving event in support of the fund.

The second Be Brooks Brave and Shave Summer Celebration raised $28,329 for the St. Baldrick’s Foundation. The fundraiser, which exceeded its goal by $7,000, was held at Westfield CrossFit BBZ and was nationally sponsored by Sports Clips. The event included head-shaving and braiding.

The fundraiser is conducted by St. Baldrick’s. It is one of the largest non-government funded cancer research organizations for children in the world.

Evers participated in the fundraiser last year and shaved his head for the cause. He was recognized for raising the most money at last year’s event.

Some of Evers biggest supporters were his co-workers.

“I cannot thank my fellow UPS pilots enough. I am up to over $1,000 of donations from just them,” Evers said.

St. Baldrick’s and the Blackmores began the event in 2018 after Brooks was honored as one of St. Baldrick’s Angels. Tracey embraces the fundraiser a powerful way to keep Brooks’ memory alive.

The story behind pilot Brian Evers and the Hot Wheels

The Shave Summer Celebration fundraiser is not the only way that the Blackmore family honors the memory of Brooks Blackmore. 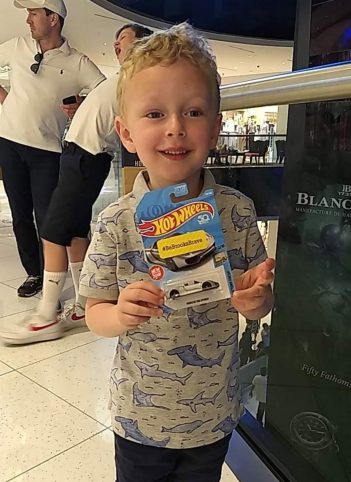 Fraser Cain discovered one of the Hot Wheels cars Brian Evers placed to educate others on Brooks Blackmore in the Dubai Mall.

Brooks was diagnosed with stage IV cancer in June 2015. He had two inoperable brain tumors and later a spinal tumor. He died in May of 2016 at age 6. For his seventh birthday, his mom, Tracey, wanted to honor Brooks. Because of his dream of becoming a racecar driver, Blackmore began to hide Hot Wheels locally to spread awareness of childhood cancer and to memorialize Brooks. The Blackmores called the program Finders Keepers.

Tracey continued to post updates on Brooks’ health during his fight as well as updates after he died. One of the people that followed the journey was Westfield resident Natalie Evers. After finding it emotionally difficult to read the posts, Natalie kept tabs on the Finders Keepers campaign. She contacted Tracey Keepers and offered help through her husband, Brian, who is a UPS pilot.