On Jan. 2, Carmel resident Michael Petrie celebrated his 65th birthday and 40th year in banking. The time couldn’t have gone by much better for Merchants Bank of Indiana’s chairman and CEO.

“This is the American dream. Two guys start a company and take it public (on the stock exchange),” Petrie said. “We provide jobs for 350 people. We love the organization. We love the people.” 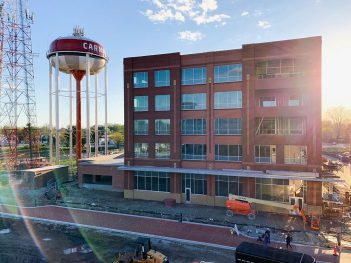 The Merchants Bank headquarters is under construction in Carmel’s Midtown. (Submitted photo)

Petrie and his longtime business partner, Randy Rogers of Zionsville, started PR Mortgage & Investments in 1990. It was rebranded to Merchants Capital, which is now one of the divisions of Merchants Bank of Indiana. Petrie started his career at Merchants Bank and Trust, which was later sold to National City Bank, which retired the name. He started working for Merchants Mortgage Corp. in 1980. Rogers was the president of the group. He and Rogers left to form their new company knowing the old Merchants was about to be sold. Rogers, who is semi-retired, now serves as vice chairman.

Soon, the Carmel-based company will have a new home Carmel’s Midtown.

“Since we are building this 125,000-square foot, five-story office building where we are going to headquarter our company, we are trying to build some excitement around that,” Petrie said. “We want to let people know what we are doing because we really haven’t advertised, so we’re letting people know.”

Officials made the decision to bring back the Merchants frog, which was used in promotions by the old Merchants Bank. 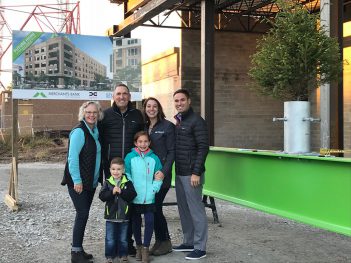 “Our campaign is focused around deposits because we pay about the highest rate in the market for deposits. We also provide electronic mortgage solutions for people,” Petrie said. “We don’t have a lot of people, but we get things done. We execute for our customer. My partner and I have been lending to people in this marketing place for more than 40 years. They know us and they trust us.”

Petrie said the original intent wasn’t to build a building, but that changed when Merchants kept growing. The bank has been leasing space in several buildings to keep up with growth.

In the new headquarters, three of the five floors will be dedicated to Merchants. The second floor will house its nonprofit, Merchants Affordable Housing Corp. The rest will be leased out.

“On the first floor, we’ll have a branch in there and we’re going lease out retail space that faces the Monon Trail,” Petrie said. “It’s the best work environment in the state, in my opinion. There’s not a better location in the state for people to work, live close by and access all the restaurants and amenities.”

Petrie said plans have been in the works for the headquarters for three years. The move-in date is set for Aug. 9. More than 150 employees will work at the new office.

“We’re a best place to work in Indiana for a reason, because they do treat their employees like family,” Dunlap said. “What they do the best is respect all of our employees for their talent and don’t micro-manage. When people feel trusted and respected at work, they do amazing things.”

Dunlap said Petrie advocates for the industry for the betterment of the nation.

“He fights for what he believes will help everybody, not just his agenda,” Dunlap said. “He wants to make the world a better place, and he’s a perfect example. He flies to Washington to meet with Congress to further the cause of affordable housing. He cares about Indiana and cares about the country.”

Petrie created Merchants Positively Advancing Communities Together, which invests service hours to organizations that support the advancement of affordable housing.

“With our affordable housing projects, we’ve done all the landscaping around the projects,” Petrie said. “The intent is to get (employees) active in the community and then they’re rewarded. If they give 16 hours of community service, they get 16 hours off (of work).”

Petrie shaved his head March 18 to raise money for St. Baldrick’s Foundation, which conducts pediatric cancer research. Petrie raised $21,000 and received a medal for raising the most money.

“We have had three employees that have had cancer, two women with breast cancer and one (with) another form of cancer,” Petrie said.

“One of the coolest things we’ve ever done is The Village of Merci apartments in Fort Ben (Harrison),” Petrie said. “We took officer barracks and converted it for 20 units for developmentally disabled adults. A lot were 30- to 50-year old individuals who only lived at home. Three were working outside the house. Now, all 20 work outside the house. They’re much more independent and it’s really a cool project.” 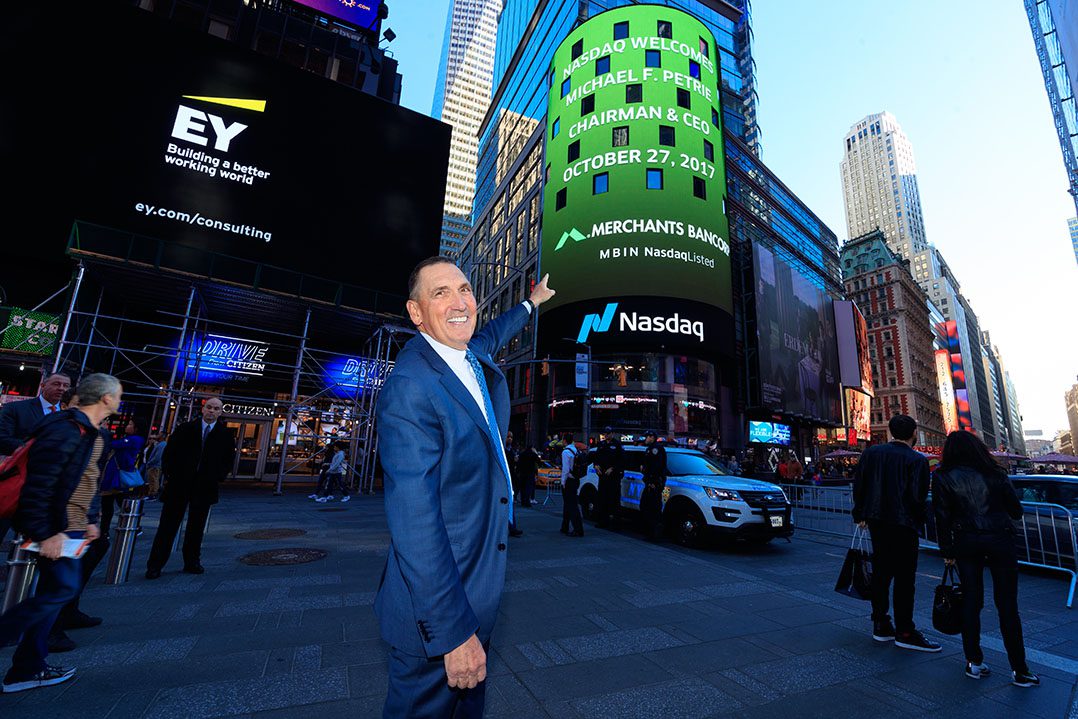 Michael F. Petrie, CEO and chairman of Merchants Bank of Indiana, points to Merchants Bancorp’s NASDAQ banner after the company made its stock market debut in 2017. (Submitted photo)

Personal: Age 65. Graduated from Logansport High School in 1972. Worked mostly full time while going to college and graduated with a degree in finance from IUPUI in December 1978. Got an MBA from IU while working at Merchants. Has lived in Carmel for 10 years, previously living on the north side of Indianapolis. Petrie and wife, Jody, have two daughters, Emily Petrie, Denver, and Julia Kaercher, Carmel. Julia and husband Matt Kaercher, who works for Merchants Capital, have three children Reagan, James and George. Julia works for Merchants Affordable Housing Corp., a nonprofit that has 2,500 units of affordable housing. Emily graduated from Bishop Chatard High School in 2003 and Julia in 2005.

Hobbies: Golf and fly fishing. Is a Crooked Stick Golf Club member and president of Highland Golf and Country Club in Indianapolis and is an Indiana University Varsity Club board member.

Honors: Chairman of the Mortgage Bankers Association for one-year term starting in October 2004. Was first chairman in that organization that came from multi-family lending background instead of residential background. Received Sagamore of the Wabash in 2004. Recently named to IU Kelley School of Business Academy of Alumni Fellows.