You are at:Home»Current in Carmel»Carmel Community»Kenley offers advice to HCLA alums

Kenley, a Noblesville Republican who was chairman of the Senate Appropriations Committee, served as the keynote speaker at the HCLA’s 6th Annual Leadership Summit June 18 at the Embassy Suites Conference Center in Noblesville. Kenley retired in September 2017 after serving Senate District 20 since 1992. 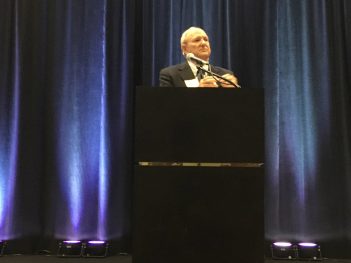 “This is a great tradition and a great program, and thanks to visionaries that started this process,” Kenley said.

HCLA selects a group of leaders each year to complete a comprehensive 10-month curriculum exploring issues. The 35 graduates explored projects such as affordable housing in Hamilton County, creating a domestic violence shelter in the county, starting a Hamilton County Youth Leadership Academy, workforce development for the construction industry and helping area children be their best.

The group’s mission is to connect and cultivate leaders while inspiring them to serve the community.

“There is a reason why people have asked you do to this. They see something in you they think can benefit other people,” Kenley said. “We need you to continue to make Hamilton County to be a great place to live and work. You can set an example for the entire state.”

Kenley, who encouraged graduates to use the gifts they’ve been given through the training, said that listening and timing were two keys for him.

Kenley said most people don’t want elected officials to tell them all the things they are going to do.

“They want to tell you what is on their mind,” he said.

Kenley said his military service during the Vietnam War era was good for him as far as learning leadership skills. He said some kind of service commitment for all young people before they start their careers would be good.

“I’m not suggesting it has to be military, but I think some service commitment would be a good thing for everyone,” he said.