You are at:Home»Current in Carmel»Carmel Community»Carmel’s Speidel wins Gatorade Player of the Year soccer honor

Emily Speidel knew she was a finalist for the Gatorade Player of the Year Indiana for girls soccer, but the recent Carmel High School graduate didn’t expect to get the nod.

“As far as previous awards had gone for soccer in Indiana, I usually fell a little short of winning,” Speidel said. “I really had no anticipation of winning it. I did not expect it at all, so when I got an email saying I won it, it was huge. I was so excited.” 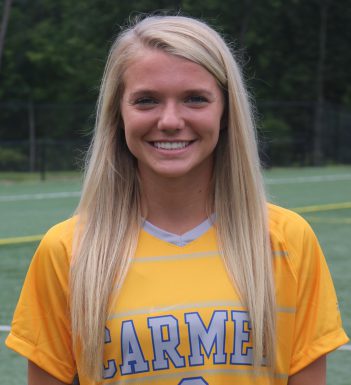 The 5-foot-8 Speidel led the Greyhounds to a 20-1-2 record and the Class 3A state title in October 2018. The team allowed only five goals all season. She missed three games with an illness, and that’s when Carmel suffered its only loss.

Speidel, who will play for Western Kentucky in the fall, plays for FC Pride Soccer Club’s Women’s Premier Soccer League.

Speidel chose Western Kentucky because she said she felt she fit in with the other players, which include ex-CHS player Chandler Backes, and playing time.

“The biggest factor was having the opportunity to get on the field as a freshman,” she said.

Having competed for a state title should help.

“Being in front of that many people in that kind of atmosphere helps you take your game to the next level and sets you up to want to do well,” Speidel said. “My club team has had so much success over the years. I would be nowhere near the player I am if I wasn’t playing with the group of girls that I did. They’ve helped me so much.”