You are at:Home»Lifestyle»Health»Franciscan to become first hospital in state to use new robotic technology to diagnose, treat lung cancer

Franciscan Health Cancer Center in Indianapolis will soon become the first hospital in the state to utilize new robotic technology to diagnose and treat lung cancer patients. The Auris Health Monarch Platform is used to view the inside of the lungs and obtain a tissue sample for biopsy. 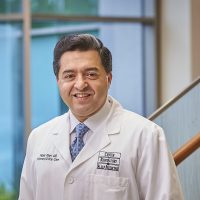 “By the time lung cancer presents with symptoms, it’s already too late,” said Dr. Faisal Khan, an interventional pulmonologist and Carmel resident. “It has to grow to a certain size to produce symptoms, but typically when that happens, the cancer is in Stage 3 or 4. The overall mortality of lung cancer has traditionally been high because there was no way to detect and diagnose in the early stages.”

Traditional methods of detecting lung cancer, such as CT scans, bronchoscopies and needle biopsies, all have limitations on accuracy, safety and invasiveness.

The new platform utilizes a small hand-held device similar in appearance to a video game controller. It combines views inside the lung with computer-assisted navigation based on 3-D models of a patient’s lung anatomy.  The system provides the user with continuous bronchoscope vision throughout the entire outpatient procedure.

“The Monarch will allow us to see a nodule, reach it and biopsy all in one procedure,” Khan said.

The technology behind the system is constantly changing.

“Currently, there are trials using radio frequency microwave ablation of small peripheral tumors for non-surgical patients,” Khan said. “It will allow us to go through the four steps of detection, diagnosis, staging and then treatment, all combined potentially in one procedure.”