Hamilton Southeastern sprinter Noah Malone had been training to peak the moment he lined up to sprint at the IHSAA Boys State Track and Field Meet. 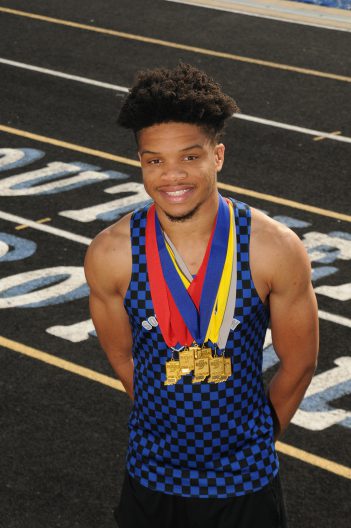 “I felt I executed well,” Malone said of the May 31 meet in Bloomington. “The competition brought my times down.”

Malone, who is visually impaired, broke a para world record in winning the 200-meter dash in a time of 21.307 seconds, breaking the previous standard of 21.56. Malone out-leaned Pike’s Jahn Riley, winning by two-thousandths of a second.

“It was a crazy finish, for sure,” said Malone, who will be a senior this fall. “I’ve been working towards this for awhile. I couldn’t believe it how it happened.”

“With the high level of competition from other schools, what Noah did to win the 200 and come in second in the 100 is extremely impressive,” Royals first-year coach Brian Akialis said. “He holds our school record in both events and continued to improve all year. These accomplishments to end the year speak volumes about his hard work and dedication to the team.”

Malone will participate in Paralympic events in Switzerland and Peru in August. 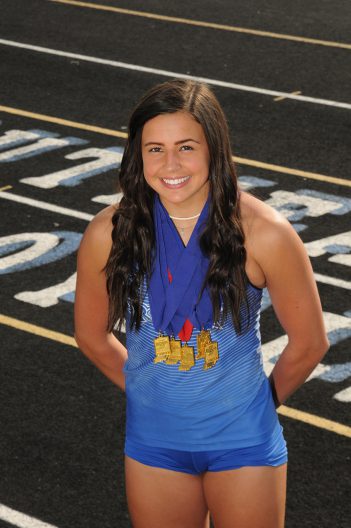 Hamilton Southeastern also had a winner in the girls state meet June 1 in Bloomington. Kennedy Drish, who will compete for Virginia Tech, won the pole vault for the third consecutive year.

“What made it special is I was injured all season and overcoming the adversity,” Drish said.

Drish tore ligaments in her ankle running in an early April practice after competing in one outdoor meet. She returned a couple days before the sectional.

“I called my coach two hours before the meet and said I’m going to give it a try,” she said. “I just went four steps and cleared the state standard (to qualify for regional) and I stopped. I had two practices and went to six steps and competed in regional with that (pace).”

Drish broke her won own regional record with a vault of 12 feet, 6 inches and then went 12 feet, 9 inches in winning state.

“I had to work for this (state title) harder than my other ones,” Drish said.

Fishers coach Nathan Warnecke said the members showed faith in the program and in each other. Warnecke said they talked in late April and early May about what the relay team could achieve through dedication.

“All four guys bought into that idea and raced for each other and the tradition which has been built within the FHS distance program,” Warnecke said. “All four sacrificed their individual events to one extent or another for the relay.”

Recent Lawrence North graduate Nathan Stone captured the pole vault championship with a vault of 16 feet, 6 inches. He was runner-up in the state in 2018.

“I can only dream that all of my kids can grow up to be people of great character, charisma and competitively driven to succeed in everything they do,” said Wildcats coach Pat Mallory, a father of three. “When Nathan was a freshman, our pole vault coach and I were looking for new kids to join the track team. Nathan was one that was pointed out. We tried and kept trying, but he didn’t seem very enthusiastic about doing so. So after a week or so, I contacted his parents, Melanie and Trent. I told them that we see something in Nathan with pole vault and if you will help us to keep steering him in that direction, we won’t let you down.”