You are at:Home»Current in Geist»Geist Community»Greater Lawrence Chamber of Commerce conducts talk on infrastructure, pedestrian plans

Jen Higginbotham understands the values of bikeways and walking paths.

Higginbotham, the principal planner for the Indianapolis Metropolitan Planning Organization, discussed bike, pedestrian and infrastructure plans for Lawrence Township June 6 at the Greater Lawrence Chamber of Commerce at the Sterrett Center. She was joined by Brad Beaubien, a long-range planning administrator for the Dept. of Metropolitan Development for Indianapolis. 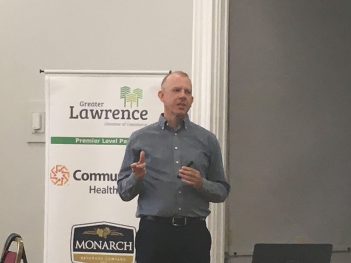 Brad Beaubien, a long-range planning administrator for the Dept. of Metropolitan Development for Indianapolis, speaks at the Greater Lawrence Chamber of Commerce. (Photo by Mark Ambrogi)

“If you are getting out on your trails, you are thinking about exercising,” Higginbotham said. “It can help with things like weight management and increase muscle strength. Having the option of taking a bike to work can reduce the traffic stress of sitting in traffic and watching someone in the bike go by you.”

Higginbotham said biking also reduces the use of fossil fuels.

“You are having less traffic congestion, which can lead to less emissions,” she said. “There also will be chemical runoff from cars that require oil changes. All those things end up in our environment one way or another.”

Higginbotham said if people get used to walking or biking for trips, they also will likely use transit for part of the trip.

“The most successful trails are ones connecting where people work, live, and shop” she said. “A trail in a park connected to a subdivision is not as successful, generally, as the Monon or Cultural Trail, which is connecting a lot of people to a lot of places.”

Beaubien said active transportation, such as bikeways and walking paths, have value economically.

“A recent study in the state shows trail users spend $1,700 on food and beverage,” Beaubien said.

When Monon Trail opened in the late 1990s in Broad Ripple, Beaubien said property values rose. He said many small and local businesses opened up because of the Cultural Trail in downtown Indianapolis. For instance, 73 percent of the businesses in Fletcher Place were established between 2010 and 2014.

Beaubien noted the success Carmel and Fishers have had creating walkable areas.

“Trails are an important piece of that walkability,” Beaubien said.

Beaubien listed the goals for transportation plans to be health and safety, sustainability and resilience, economic development, equity, choices and strategic investment.

Higginbotham encouraged the audience to take a Metropolitan Planning Organization survey at regionalpedplan.metroquest.com, which is available until June 21. That will help determine priorities, she said.

“Two miles is pretty much the distance when they are going,” she said.

Then, 76 percent said they would walk or bike if they could.

“Thirty-four percent said they really would if they could and 42 percent said they probably would,” Higginbotham said. “The reasons they cited because they don’t bike or walk to work now is there is too much traffic. That’s a pretty standard reason why people say they don’t.”

Higginbotham said the number of people saying they would if they could is higher than most other areas.