Carmel High School freshman Lauren Littell and sophomore Leila Antony not only had never played doubles together before this season, they barely knew each other.

Littell moved to Carmel a week before the season started from Tucson, Ariz.

“Everyone was really welcoming,” Littell said. “Once we started playing doubles together, we gained a lot of confidence through the season, and I think that helped us.” 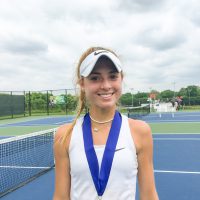 Littell said the team was focused in the final.

“We just kept our head in the game,” Antony said. “We were super positive and motivated each other. When we get on a roll, we just keep going.”

One of those sets was in the morning semifinals as Littell and Antony topped Jasper’s Josie Yarbrough and Suchi Bandru 7-5, 3-6, 6-2.

“It’s a little windy out, but I knew it wasn’t going to be perfect conditions,” Pittman said. “I just had to stay calm and play my game. (Trinkle) is a really good player. I knew it was going to be a close match.”

Pittman, who had beaten Trinkle in an invitational during the 2018 season, advanced by beating Evansville Memorial’s Ellie Myers 6-3, 6-1 in the semifinals.

Cathedral coach Mark Noe, a longtime Carmel resident, said Pittman has the opportunity to go down as one of the best girls tennis players in state history. Pittman helped lead the Irish to a state team title June 1.

“She’s been the epitome of a buzzsaw all year,” Noe said. “She’s been an anchor for the team. For her to beat someone like Trinkle, she’s nails. She’s very mature for her age. She’s one of the hardest workers I’ve ever had.”

This was Pittman’s first opportunity to compete in the singles competition, only open to No. 1 singles players. Last year, she played No. 2 singles behind 2018 graduate Maeve Koscielski, who won the state title as a sophomore.