Samantha Robbins has become a fixture at the Miss Indiana competition.

The Zionsville Community High School graduate will be making her fourth consecutive appearance in the competition, which will conclude with the finals June 15 at the Zionsville Performing Arts Center. She will be joined by 2015 ZCHS graduate Paige Harder in Miss Indiana and two ZCHS students, Olivia Broadwater and Shaylee Barnes, in the Miss Indiana’s Outstanding Teen competition. Preliminary competition is set for June 12 to 14.

Robbins had considered taking this year off from competition to pursue an internship in graphic design.

“One of my close friends, Lydia Tremaine, was crowned Miss Indiana and I knew I wanted to be with her this June when she is giving up the title,” Robbins said. “My ultimate goal is to become Miss Indiana and represent Indiana at Miss America and all around our state one day. I don’t see any reason to stop competing if I’m growing and learning each and every year. I’ve just decided to keep going and it’s been beneficial to me.”

She qualified by winning the Miss Ball State title and will be a senior at the university this fall.

“My first year at Miss Indiana I rapped, so I went from rapping to tapping,” she said. “I’ve taken the highest level of tap dance class, so now I just have to tap on my own to stay up with that.”

“I work at Late Nite, which is Ball State’s alcohol-free party we have every weekend,” she said. “We have a free carnival for everyone. We like to create a healthy environment alternative to the alcohol culture of a college student.”

Harder was the second runner-up last year in the competition. She earned the Miss Hoosier Spirit title and Edward Poe Instrumental Scholarship for piano performance.

“It started (playing piano) when I was 6 years old, so it’s definitely something that I’m passionate about,” Harder said.

Harder graduated from Taylor University in December 2018 with a major in exercise science. She is works full time for a nurse practitioner. She plans to return to accelerated nursing school with a goal of becoming a nurse practitioner. Harder’s family moved to Carmel when she was in college.

Harder embraces the camaraderie at the competition.

“I was blown away by how gracious the other girls were,” said Harder, who qualified by winning the Miss Central Indiana title and also competed one year in the Miss Indiana Outstanding Teen competition.

Robbins agreed the women support each other.

“It’s like a whole comedy variety show backstage,” she said. 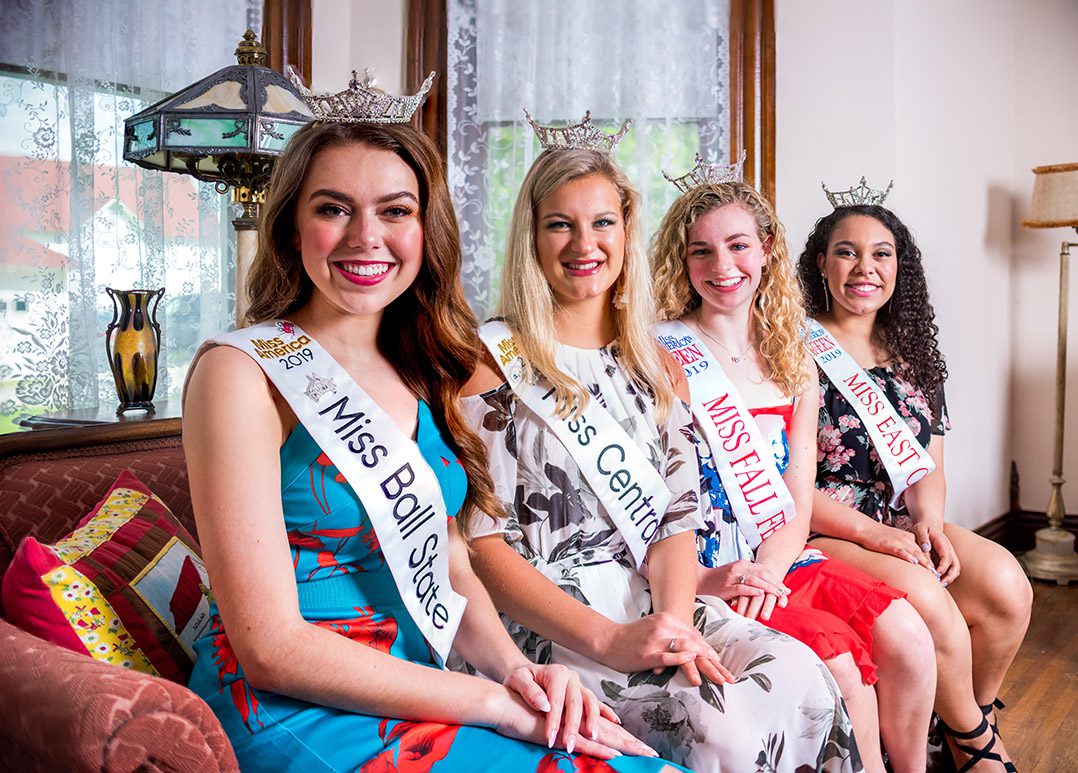 From left, Samantha Robbins, Paige Harder, Olivia Broadwater and Samantha Robbins will compete in the Miss Indiana competition in Zionsville, with the finals set for June 15. (Photos by Ben Stout)

One reason Olivia Broadwater decided to compete for a Miss Indiana’s Outstanding Teen title is she loves the idea of creating her own platform.

“My grandfather was diagnosed with Alzheimer’s when I was really little,” she said. “The one thing that brought things back to him was when I would sing and dance in his room. I never forgot that. When I was little, I started doing lemonade stands and raising money for Alzheimer’s. I wanted to be able to help people use music to help them like I helped my grandfather. I’ve done research, and the part that is connected with music doesn’t affect the brain. I think (music) is such a universal power.”

In July 2018, Broadwater, who will be a senior this fall, took part in the Songbook Academy summer intensive and qualified for the top 10, performing in the finals at the Palladium in Carmel.

Broadwater competed in her first pageant with Fall Festival and won.

“It’s opened a lot of new doors I never expected,” she said. “I’ve had a lot of singing opportunities. I was able to sing the national anthem at the Alzheimer’s Walk, which was amazing. I’ve been able to raise a lot of money for Alzheimer’s and the Children’s Miracle Network.”

Broadwater, a member of the school’s mixed show choir as a junior, gave up swimming this past season to concentrate on Miss Outstanding Teen.

“I just want to raise awareness about my platform and the other girls’ platforms, and I’m just looking forward to a fun week,” she said.

Shaylee Barnes, who will be a junior, is in the Miss Outstanding Teen competition for the second consecutive year.

“The thing that keeps me coming back is the relationships that I’ve made,” Barnes said. “I’m so close to all the other girls. I have to keep coming back because they’re from all over the state, so pageants is the only place I really get to see them and hang out with them a lot.”

“My mom (Nikki Barnes) used to work at the Children’s Home (in Lebanon), so I got to know some of the kids, and hearing their stories made me want to educate other people on mental health issues,” she said.

For more or tickets, visit missindiana.org.