You are at:Home»Current in Fishers»Fishers Community»Hamilton capping high school basketball career in style

For 2019 Hamilton Southeastern High School graduate Amaya Hamilton, this has been a fitting finish to her high school career.

“I couldn’t ask for a better ending with a win with my favorite teammates I’ve ever had,” she said. “Now, I get to play on the (Indiana Girls) All-Star team, and I can’t think of a better way to end my high school career.” 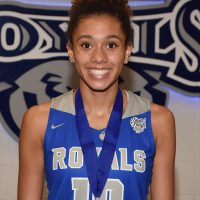 The 6-foot-2 forward helped lead the Royals to a 27-1 season and a Class 4A girls basketball state championship in February. They defeated Lawrence North in the final. Hamilton and the Indiana Girls All-Stars will play Kentucky June 7 in Louisville and June 8 at Bankers Life Fieldhouse in Indianapolis.

Like winning a state title, becoming an Indiana All-Star has always been a goal for Hamilton.

“I always looked up to Taya Reimer a lot, and she was one of the All-Stars we had at HSE,” Hamilton said. “Both of my parents went to Notre Dame and I was a huge Notre Dame fan, so when I found out she was going to Notre Dame, I was always obsessed with her and followed her game.”

Reimer, a 2013 Indiana All-Star, played for Notre Dame before leaving for Michigan State as a graduate transfer. Hamilton’s father, Brian, played football for the Irish.

“I’m looking forward to playing with the girls. Some of them I’ve played AAU with or against in high school,” Hamilton said. “They’re all super-talented and I’m lucky to be on the team with them.”

Hamilton, who will play for Duquesne University in Pittsburgh next season, averaged 11.7 points and 6.6 rebounds per game. She shot 39 percent from the 3-point line.

“One of the reasons we were successful is everybody knew their roles and everyone did them to the best of their abilities,” said Hamilton, who plans  to study to become a physician’s assistant. “I tried my best to be a well-rounded player and not just a scorer.”

Hamilton Southeastern coach Chris Huppenthal said it would be tough to find a better person than Hamilton.

“She’s genuine, she’s kind, she’s caring, she’s compassionate,” Huppenthal said. “She’s everything you are looking for in a human being. At times through her first three years, that side of her got in the way of her being a great basketball player. I think going into her senior year, she learned how to flip the switch and be more of a competitor. She was more aggressive. It helped her a lot. The way she rebounded the basketball for us wasn’t anything we’ve seen out of her the previous three years. She can play inside and outside. She was tough to guard for a lot of teams.

“She was the perfect player for us. She took the shots when we needed it, she didn’t overshoot. She did a lot of things we needed to help us be successful.”

Huppenthal said Hamilton was unselfish in playing for a talented team led by Sydney Parrish, who averaged 21 points last season. Parrish, a five-star guard who has committed to Oregon, is an Indiana Junior All-Star and will play against Hamilton and the rest of the Indiana All-Stars June 5 in New Castle.