You are at:Home»Current in Fishers»Fishers Cover Stories»State of the City: Fishers Mayor Scott Fadness promotes collaboration to boost region

For Fishers Mayor Scott Fadness, it is clear what is the most precious resource of his city.

“It would do us well to consider the welfare of the resource,” Fadness said during his State of the City address May 22 at the Embassy Suites by Hilton Indianapolis Conference Center. “How are our people doing and what is the sustainability of our people?”

When researching numbers, Fadness found they weren’t good. Indiana is 42nd out of 50 states overall in public health; 48th in quality of life; 46th in higher education; 48th in health of natural environment; 44th in smoking population; and 42nd in mental health. At the same time, there is an 11 percent increase in mental distress incidents.

The Indianapolis metropolitan area ranked last among workforces with residents with college degrees at 33.1 percent when compared to Pittsburgh; Nashville, Tenn.; Milwaukee; Columbus, Ohio; Austin, Texas; Denver and Raleigh, N.C. Only Nashville, Tenn., has lower average wages ($35,620) than Indianapolis ($36,030), but it is growing at a faster rate.

“We need to roll up our sleeves, not retreat to our individual fiefdoms and not blame the state, but come together and work as a region to tackle these collective issues,” Fadness said. “Not only because it’s the right thing to do but every other region is already doing it.

“Changing the trajectory of our people’s quality of life can seem daunting for a community, but if we collaborate as a region, I believe we have the opportunity to grow our way out of our problems.”

During the 2019 Indiana Legislative Session, Fadness, on behalf of Accelerating Indiana Municipalities, advocated for Regional Investment Hubs. Regional Investment Hubs establish a mechanism for any region in Indiana to raise local revenue on a sustainable, ongoing basis to fund transformative capital projects. The legislation did not pass the General Assesmbly but has been assigned to a Summer Study Committee for further consideration.

Fadness reported a collaboration with Indianapolis Metropolitan Police Dept., where the Fishers Police Dept. began registering confiscated firearms and ballistic materials in a database that tracks ballistic and DNA evidence for every firearm and bullet collected in Indianapolis.

As a result of the collaboration, of the 13 firearms or shell casings confiscated in Fishers since January, nine of have been connected to a violent crime in Indianapolis. Fishers Police Dept. played host to more than 100 law enforcement officers across Hamilton County for training on the National Integrated Ballistic Information Network database as a first step toward a regional approach to combating violent crime.

“Imagine what our region could do if we focused on the strategic things,” Fadness said. “The time has come for our region to build a system that will allow us to speak with one collective voice to marshal some of our collective resources towards an idea that was once thought far too ambitious for one individual city to accomplish. I am committed to seeing this happen during my next term in office, not only because I think it’s the right thing to do, but because I believe it’s directly tied to the long-term success of the city I live in and the city I love, Fishers.”

Fadness was joined by several speakers who delivered short reports on city activities and accomplishments.

Allen Bourff, superintendent of Hamilton Southeastern Schools, explained how CurioCity, a partnership between the city and the school district, has become a citywide campus for learning.

“It’s removing the walls, figuratively, so students can come out and use the city as a place for learning,” Bourff said.

Examples include a Nature First program where every first-grader in HSE Schools, which provides a curriculum for first-graders based on the Indiana science standards, Bourff said.

“The city and the parks department have developed this program with us,” Bourff said.

For every fourth-grader, there is an Indiana History Experience from a STEM perspective at Conner Prairie.

In other school news, HSE Schools Mental Health and School Counseling Coordinator Brooke Lawson said 1,238 students have received mental health support in the school district since October 2016, which is a direct result of the 2016 school referendum which opened funding to establish what is now 17 licensed therapists, one crisis liaison and a life-skills clinician.

“The outcomes have been great,” Lawson said.

HSE has not lost a student to suicide since 2013. Since last semester, Lawson said here has been a 3 percent decrease in suicide idealization while the rest of the nation has increased.

“One of the most exciting things is next year we’ll begin to teach social and emotional skills to students, things such as managing emotions, solving problems, getting along with others, which we believe will help our students become mentally healthy, reduce the likelihood they’ll experience mental illness and make them more skilled for their futures,” Lawson said. 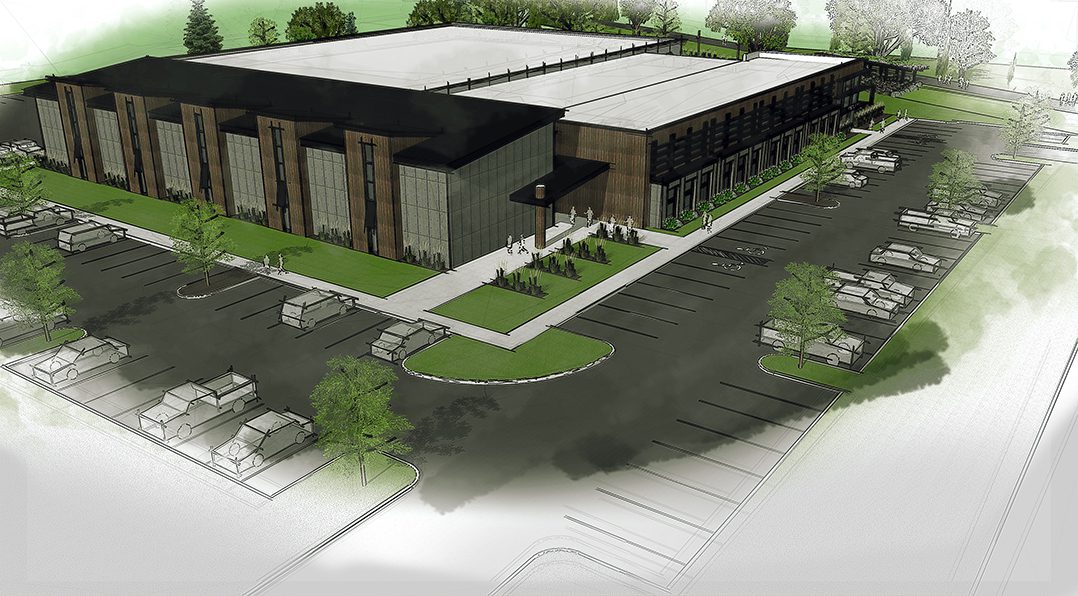 Construction on the Hub and Spoke design center and the First Internet Bank will begin this summer. (Submitted rendering)

The IoT Lab has had approximately 3,000 visitors in its first year of operation. the IoT, which stands for The Internet of Things, is home to 15 companies.

The Fishers Test Kitchen restaurant accelerator, powered by Launch Fishers, is set to open at The Yard at Fishers District in the fall.

“We’ll have three small restaurants that will serve a 350-seat food hall,” Wechsler said. “There will be a tasting area.”

Wechsler said chefs are encouraged to apply at fisherstestkitchen.com.

The Signature Table will hold one night-only events.

In other economic news, City Economic Development Director Megan Baumgartner said construction on the First Internet Bank and the Hub and Spoke Design Center will begin this summer.