You are at:Home»Current in Noblesville»Noblesville Cover Stories»‘I’m just a person’: Jason Seaman discusses the evolution of using his voice for good, plans to give back through family fund

Jason Seaman isn’t at all comfortable being called a hero.

He rejects the label and maintains that his actions on May 25, 2018, to stop a shooting in his classroom are what any other teacher would have done to protect students.

Seaman, who has been with Noblevsille Schools for five years, teaches seventh-grade science at Noblesville West Middle School. In the past year, he has been hailed as a hero for potentially saving numerous lives when a then-student opened fire in his classroom, shooting student Ella Whistler seven times. Seaman was struck three times — in the hip, abdomen and forearm.

“I have, and will always, stick by the fact that the kids were in need,” Seaman said. “If kids are in need and you can help, you should. That doesn’t make me special just because of the severity of it.”

“People are always looking, whether they come up and say anything or not, but if I go to the grocery store, I can always count on a handful of that, or if I’m just around town, then yeah, people will come up,” Seaman said. “But if I go down to Castleton or downtown (Indianapolis), I’m just another guy on the street. It’s definitely localized, and people are just trying to be nice and friendly.

While his now-1-year-old daughter, Emery, was only 6 weeks old at the time of the shooting, the extra attention the family receives doesn’t go unnoticed by his son, Jamison, who, at age 3, sees everyone as a new friend.

“It is funny because my son, as a 3-year-old, would typically be very shy around people, and now he just wants to talk to everybody,” Seaman said. “He just knows that I got hurt, and we’ve talked about that. If I’m around the house or doing yard work without a shirt on, he’ll see scars and say, ‘That’s where you got hurt,’ but in his mind, he doesn’t know why or the lasting impact.”

Seaman said strangers approaching him and thanking him is unnecessary but nice, but attention from other sources is less welcome.

“It just depends on what their perspective is and what I interpret their motivation to be,” he said. “I have people from other states who want me to write them letters or send them video messages supporting their cause, but I’m not going to affiliate myself with something that I’m not hands-on with. They’ve got their agendas, and they just want to use my name and don’t want anything other than that. I’m not interested in endorsements or being used to catapult someone else’s thing. No thanks.”

In the immediate aftermath of the shooting, Seaman felt obligated to answer questions or tell his story. Now, he views speaking engagments as an opportunity to provide input on helping others and keeping them safe.

“It’s the same action, just with a different outcome, so why should the penalty be different?” Seaman said. “So with that, some people got involved and skewed it in a way that made representatives scared to touch it, so it got shelved. Logic would tell us that someone did something wrong that couldn’t be reversed if done effectively, so why should we treat them differently just because it didn’t work? So, that was frustrating.

(Government and politics) is a dicey subject just because I want to be involved because I’ve been directly impacted by it, but I am in no way the voice of reason.

“There are multiple perspectives to think about,” he added. “Honestly, getting involved in politics is a muddy game, and I don’t want to get involved in more of that over spending time with my family or teaching. So, (new legislation) is something I want to be done correctly, but it’s not something I really have faith will get done correctly, especially with what happened this last (legislative session). It’s that fine line of I want to be involved, and I want to be part of it, but I am not thinking that I’m a crucial part to it, and I also don’t want it to be something of when (the General Assembly) is in session that I have to be down there all the time. I have to navigate those waters carefully. Are they trying to get the thing passed right, or are they just trying to pass something that benefits somebody else that I have no idea about?”

On May 17, a week before the 1-year date of the shooting, Seaman was the keynote speaker at the Hamilton County Prayer Breakfast in Carmel, where he discussed how another unexpected event changed his life, setting the course for his career as a teacher and his overall outlook.

“Back in 2006, I was a junior in high school. I’ve always been incredibly athletically gifted,” Seaman said at the event. “At that point in time, seven of the 11 Big Ten schools had offered me a scholarship for football. On Jan. 21 (during basketball season), we were playing one of our conference rivals. In a typical play, I jumped for a rebound and came down when my left foot landed on another foot. My MCL was torn, my ACL was torn, my cartilage and meniscus was torn in two places.

“Once the news broke that I had that much damage in my knee, all seven of those offers slowly disappeared.”

Instead of spending hours in the weight room or woking on drills, Seaman suddenly had free time on his hands while he recovered.

“What I realized in that time was that I had become incredibly self-centered and selfish. My goal was to play Big Ten football, but I hadn’t been appreciating or acknowledging the support I had around me that was making that possible,” Seaman said. “I had a mental awakening that these people were doing tremendous things for others, and they weren’t expecting anything in return.”

Seaman said at that point he realized he may want to become a teacher.

“I always liked working with people, and I had always had a fascination with science,” he said. “I was about to go into college. I thought I had everything I wanted, and then it was gone. I ended up playing college football (at Southern Illinois), but my whole mindset had changed. Football was something I loved, but now it was my avenue to do something great.” 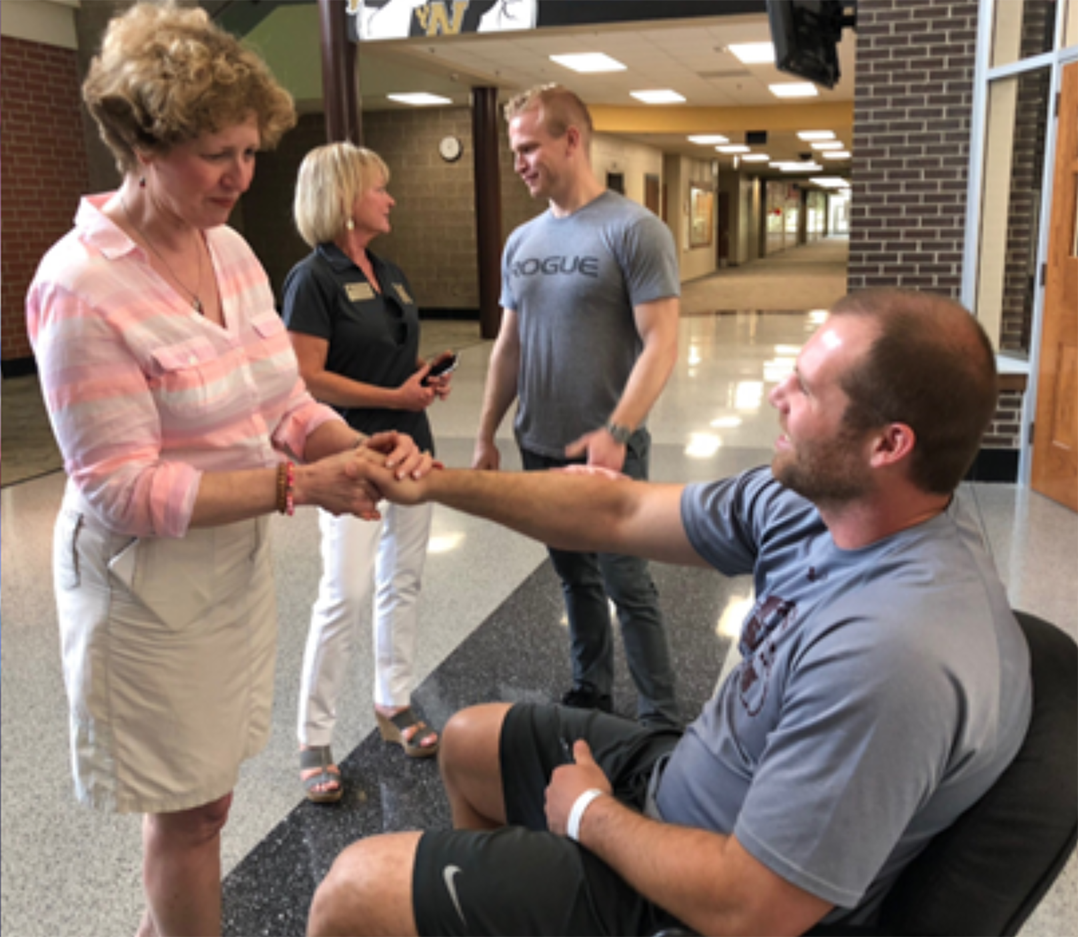 Jason Seaman greets Congresswoman Susan Brooks at Noblesville West Middle School, one day after the May 25, 2018 shooting and the same day he was released from the hospital. (File photo)

GIVING BACK and LOOKING AHEAD

Today, the impact of May 25, 2018, has led Seaman and his wife, Colette, to use speaking engagements as opportunities to promote the Seaman Family Fund, under the Hamilton County Community Foundation, an arm of the Central Indiana Community Foundation.

“We talked about what we wanted to do with all of the speaking engagements and if I even really wanted to do them. If I did, what would be the purpose behind it?” Seaman said. “All of these places want to compensate the keynote speaker, but I don’t want to make money off it because that’s just distasteful to me.”

As a result, Seaman said he has the paying organization put the money directly into the Seaman Family Fund.

“We’re accumulating funds in that, which is going to then spill back into central Indiana for various things, like neighborhood centers, the Humane Society, veterans affairs, stuff like that,” he said. “I am very selective with engagements that I do, but whatever is generated monetarily from that always goes into the fund. It’s kind of like a side hustle, but for the community.”

The amount in the fund must reach $25,000 before the Seamans can award grants from it. Seaman said he is tapped for speaking engagements about once a month, but he’s not sure when the requests will slow down or stop, so each is an opportunity for something greater, a move that, no doubt, will garner continued praise.

Those who wish to donate directly to the Seaman Family Fund should contact Heather Woock with the Hamilton County Community Foundation at 317-843-2479 ext. 527 or at heatherw@cicf.org.

“Contrary to what many have said, I’m not a hero. I’m a person who makes a choice every day to do what’s right,” Seaman said. “I don’t want to minimalize the events of May 25, but that’s not who I am. My actions from 9 to 9:15 a.m. on May 25 are not my story. That’s a single paragraph in the story of my life. People do excellent things all the time. I feel like I didn’t really do anything special. I was faced with a challenge and I had to address the challenge. There are people out there that do heroic things every day and put their necks on the line for it. I’m not going out there looking for trouble. Trouble found me, and I had to handle it. So, I’m just a person.”