At 94, most of Gerald Mansbach’s World War II memories are crystal clear.

It’s a bit surprising, because he couldn’t even remember his own name for several months after being blown out of a Sherman tank on Jan. 25, 1945.

The Barrington of Carmel resident, who served as a sergeant in the Army and tank commander in the U.S. Army, has relayed his story to many audiences the last several years.

“Gerald’s speech was one of the most moving speeches I’ve ever heard. It was so personal and brought me to tears both times I heard his speech,” Barrington resident Claire Campbell said. “I was a kid during World War II, so to hear him speak about it was very moving. It’s amazing that at (his age), he still remembered all the places and dates in which things occurred.”

In 2013, Mansbach was awarded the prestigious French Legion of Honor, originally created by Napoleon Bonaparte. Mansbach’s other military honors include a Purple Heart, Silver Star and Bronze Star.

Mansbach, originally from Fort Wayne, was drafted in December 1942 after one semester at Indiana University. During training, he was put in the armored division and assigned as a gunner. He was later elevated from gunner to tank commander by necessity. 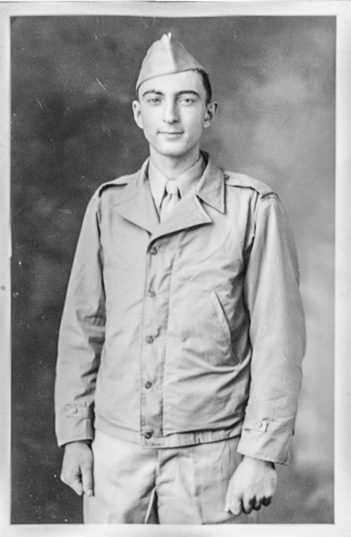 Gerald Mansbach during his days in the Army. (Submitted photo)

“Our tank commander got killed when he was hit by a sniper in a supposedly safe area,” Mansbach said.

That incident happened in November 1944 near Metz, France.

Mansbach’s Fourth Armored Division was part of Gen. George S. Patton’s Third Army. Mansbach’s tank division had just done its part in holding off the German offensive in the Battle of the Bulge. On a fateful January 1945 day, Mansbach was ordered to surveil and report on a German city.

“I noticed there was a crossroad in front of the village,” Mansbach said. “My experience told me Germans love to zero in on crossroads.”

It looked clear, however, so the troops proceeded. On the way back from the town, the lead Jeep was blown up by the Germans at the same crossroad.

“We’re a sitting duck. We couldn’t move,” Mansbach said. “I thought, ‘I got to order abandon,’ but just as I did that I heard screaming from where the first Jeep was, so I told our men to keep firing where we thought the gun was and I ran to the Jeep, which was on fire. Two were dead and two were not. It was snowing and icy. I grabbed one guy by the ankles and pulled him back behind the tank, then I went to get the second guy and pulled him back.”

Mansbach got back in the tank and began firing his machine gun. He then noticed he wasn’t getting any returning fire.

“Just then a round comes right through, a direct hit, and blew up our magazine and killed everybody except me,” Mansbach said. “I was up in the turret and those guys were in the tank. It blew me out of the turret.”

Mansbach landed approximately 5 yards away. His four crew members were killed and the explosion also killed the two men behind the tank Mansbach had tried to save.

The trailing Jeep’s soldiers thought Mansbach was dead as well and went to get help to retrieve the bodies.

“My uniform was ripped to shreds. I was completely unconscious, and nearly every bone in my body was injured or broken,” said Mansbach, who carried no identification.

An ambulance arrived to pick up the bodies.

“When they loaded me, I made some kind of noise or movement and they saw I wasn’t dead yet,” Mansbach said. “They strapped me on the hood of the Jeep and ran me back to the aid station.”

By the time he got to a fourth aid station, he had regained some consciousness.

“I didn’t remember what I was doing there or who I was — nothing,” he said.

The Army took Mansbach to a Paris hospital and then a second one, which had a psychiatric staff that could deal with his memory loss. He was there for four months. He was given sodium amytal, also known as truth serum.

“The psychiatrist had been working with it, and he thought if it was used properly it could help,’’ Mansbach said. 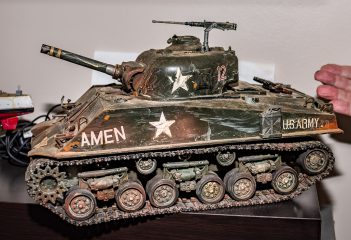 Gerald Mansbach of Carmel built and painted a replica of the Sherman tank he was in when the Germans blew it up in January 1945. (Photo by Ben Stout)

A recording device was used so Mansbach could hear his responses.

“After four months, I knew enough about myself to be sent to another hospital in England,” he said. “When they found out enough about me, they called my parents because I was MIA.”

He went to two more hospitals when he was sent back to the U.S. before receiving his medical discharge. He had been afraid to meet his parents and a sister he didn’t remember.

“I knew my mother immediately, but my dad wasn’t anything like I remembered him,” Mansbach said.

Mansbach went on to graduate from the University of Illinois. He retired after 40 years as a money manager with Merrill Lynch in Fort Wayne. His first wife died in 1993. He has two sons and two daughters.

He married his second wife, Shirley, in 1994 and lived on the north side of Indianapolis, where she worked as a Realtor for many years. They later moved to Carmel.

Like many World War II veterans, Mansbach didn’t talk about the war for years.

“I had survivor’s guilt for years and years,” he said. “I never told anyone about it because I felt it was my fault because I was in command.” 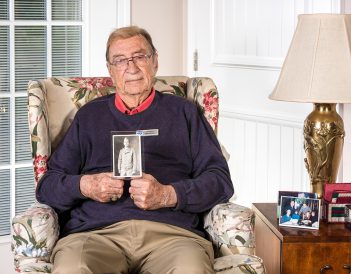 Family: Grew up in Fort Wayne. His first wife, Geraldine, a high school English teacher, died at age 66 in 1993. Has two sons, Steven and Bill, and two daughters, Amy and Lynn. Has seven grandchildren. Moved to Indianapolis and then Carmel to live with his second wife, Shirley, a realtor, in 1994.
Business: Graduated from the University of Illinois in 1948. Worked for Merrill Lynch for more than 40 years, retiring in 2000. A money manager, Mansbach was vice president for Merrill Lynch. He commuted to a Fort Wayne office after moving to the Indianapolis area. He spent three days in Fort Wayne for a few years. “I was a remote broker so I could conduct my business here,” Mansbach said. “I sold my practice to three other brokers in 1997. Then I went to Fort Wayne one day a week to familiarize them with my clients.

Hobbies: Has been making model World War II battleships for more than 50 years. Previously got into model railroads. “I need something to calm my nerves,” Mansbach said. Also has made model tanks. Still trades stocks daily for himself and family. “It’s in my blood,” he said.