“I love dancing and performing, and I think Allie has gotten that from me,” Stacy said. “She has seen me in shows and said, ‘Mommy, I want to do that.’ So when I saw the auditions come up for Lulu in ‘Waitress,’ I signed her up.” 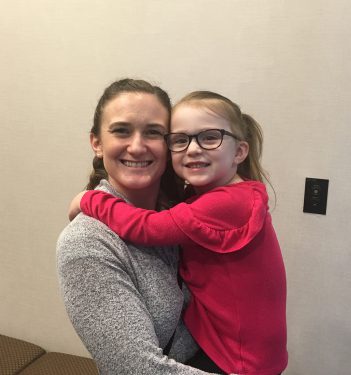 Allie, who turned 4 years old May 25, got the part and split the role with Lebanon’s Annderson Goodnight for the touring production, which was held at the Old National Centre in Indianapolis in late April. It was the only role that is cast locally in each city of the touring Broadway show.

Allie had two cute little lines to deliver, hugs the character who plays her mother and dances with everyone at the end.

At the time, Allie was in “Waitress,” Stacy — a 2006 Carmel High School graduate — was playing in Civic Theatre’s “Newsies” at The Tarkington in Carmel.

“It was surreal to see Allie on stage following in my footsteps,” Stacy said. “I couldn’t stop crying and smiling.”

“After I had kids, I wanted to get back into (acting),” said Stacy, who also has a 5-year-old daughter, London.

So, she auditioned for a Civic show and got the part. “Newsies” was her fourth Civic show.

She previously was in “Young Frankenstein,” “Joseph and the Amazing Technicolor Dreamcoat” and “Anything Goes.”

Her brother, 2005 CHS graduate Alex Smith, was in “Newsies” and performs as well.

Because of her own schedule in “Newsies,” Stacy got to see just one of her daughter’s four performances in “Waitress.”

“My husband, Preston Stacy, has been amazing,” Stacy said. “He’s turned into a stage dad.”