In his long and active musical theater career, Bill Book has never done a cabaret show. 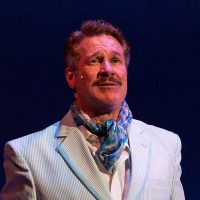 “We’re going to play some of my favorite songs I’ve accumulated through my life, all the way from the mid-1940s,” Book said. “There’s pop, swing, country and all kinds of stuff. We’re going to do a lot of different styles. It’s baby boomer-oriented because that’s me. I hope it’s going to be interesting.”

Book started doing theater in high school and was a member of the Ambassadors, the CHS mixed show choir.

“I played a lot of sports in high school and when I got out of school, I started doing musical theater since the early 1980s,” Book said. “I’ve worked about every place here in (the Indianapolis area) you could work over the years.”

The Magic Thread Cabaret is the creation of Tom Alvarez and Dustin Klein. They approached Book to see if he would have an interest in a show.

“I had never done a cabaret show before,” Book said.  “I’m usually playing a character, playing someone crazy or someone’s father. When you get older, you always like playing someone evil.”

Book has worked on the show since February.

“I had to find the songs I felt would be right for me and that I thought would be interesting,” Book said. “I’ve been working with Jeffrey Bowen on the arrangements. We’ve been going to places that he plays at to practice some songs.”

Book said “It’s a Most Unusual Day” comes from a song on an Andy Williams album he had as kid.

“It seems like a good opener,” Book said. “We’re actually going to close with an Andy Williams song, kind of bookend it. Most of the songs are my favorites. There will be songs by Nat King Cole, Petula Clark and Glen Campbell.”