You are at:Home»Current in Carmel»Carmel Community»Olds remembered for helping shape Carmel’s growth 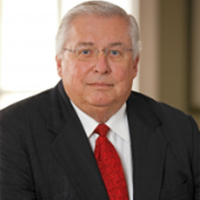 “Les served as the executive director of the Carmel Redevelopment Commission when we were putting together the vision of what our City Center, including the Palladium and Center for the Performing Arts, would look like,” Carmel Mayor Jim Brainard said in a statement. “Les was instrumental in helping us turn the old town area into the walkable and beautiful area it is today. His guidance was instrumental in helping our administration and the City Council have the confidence that we were on the right track when it came to the redevelopment of the heart of the city when few suburban communities were taking such bold steps.”

Olds, 80, died May 18 after a fall from a ladder at his Indianapolis home, according to city officials.

Olds, who was director of the CRC from 2004 to 2013, returned to work as a consultant to CRC Executive Director Henry Mestetsky,.

“Les was one of the most consummate business people and gentleman I have ever worked with,” Carter said. “His attitude was always upbeat. He was always very personable, very friendly and so competent. I learned so much working with him over the years. Not just about great planning, but also how to conduct yourself in business. He was just an amazing person.”

Carter was president of the CRC for much of the time Olds was director.

“He and I went through the construction of the Palladium,” Carter said. “When there were times that were trying, he was always very calm and very focused on getting the best job done for the citizens of Carmel.”

“As our fledging redevelopment commission struggled with many new issues and concepts, Les brought his experience and contacts within the architectural community that were needed,” Snyder said. “We were truly dealing with groundbreaking ideas that were new to a suburban community moving from a bedroom community to a small, functioning  city with offerings for everyone.”

Mestetsky said Olds was a mentor.

“Les’ bright and caring demeanor never changed,” Mestetsky said. “He will be truly missed by everyone.”

“His knowledge and background was very, very helpful to me,” Sturtz said. “We would meet two or three times a week at times. We worked very well together.”

“It’s a tremendous loss all the way around,” Sturtz said.

Olds was a founding partner of CSO Architects of Indianapolis. He had a role in the development of the Circle Centre Mall, Keystone at the Crossing and the Indiana Government Center in Indianapolis.

Olds is survived by wife, Beverly, and daughters Rhonda Leap, Robin Olds and Jennifer Linville, along with three grandchildren and three great-grandchildren.