You are at:Home»Current in Westfield»Westfield Cover Stories»Making it in Motorsports: 15-year-old Westfield resident races in USF2000 series

Jack William Miller only has a learner’s permit. But he’s already up to speed in the Cooper Tires USF2000 Championship Series, where he races at speeds up to 130 mph.

The Cooper Tires series is the first in a three-step program, the Road to Indy,  for young drivers bidding to transition from karting to IndyCars. 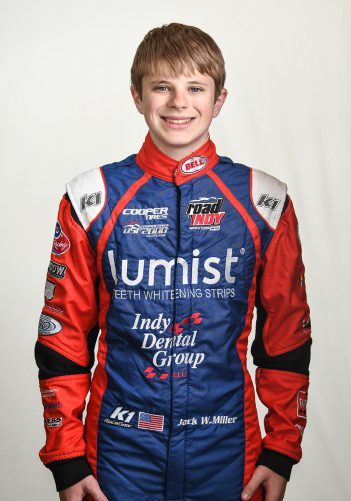 Jack William Miller plans to compete in IndyCar by the time he’s 19 or 20 years old.

Jack William is following in his father’s footsteps. Jack William’s father is Dr. Jack Miller, who raced in the IndyCar series from 1997 to 2001. He is now a dentist in Westfield.

Jack William’s first race in the USF2000 series was March 8-11 in St. Petersburg, Fla. The introduction was less than smooth.

“Our first race at St. Petersburg wasn’t good,” Jack Miller said. “It had nothing to do with Jack’s driving. We got hit a couple times, we had a couple mechanical failures. It wasn’t the result we wanted but we didn’t leave there discouraged we weren’t fast.

“We left there saying our luck needed to change.”

Jack William’s next race is May 24-26 at the Lucas Oil Oval.

“Our goal, and the way we’ve been structuring it, will be if we are successful this year, we will go to (Indy Pro) next year and then the following year move to (Indy Lights) and then IndyCar,” Jack Miller said.

Jack William, 15, started racing go-karts when he was only 3 years old. He is balancing high school and racing, which is tricky. He is a freshman at Park Tudor.

“I miss a lot of school,” Jack William said. “(Teachers) give me my work to do, and I turn it in on the weekend or get back and they give me the same amount of days I missed to make up or do my work.”

“Since we live in Westfield, we went and met with the administrators of Westfield High School, and since they get federally funded money, there’s only so many days you can miss,” Jack Miller said. “I hear very good things about Westfield school, but we have a great experience at Park Tudor, and they understand there’s a lot of athletes, so they have been very accommodating for us to miss.”

Jack William said he hopes to race IndyCar by the time he’s 19 or 20 years old. He plans to make motorsports a career.

“I just like the competition and then the adrenaline and the speed of just trying my hardest to pull the best out of myself and the car,” Jack William said.

Navigating his career path is expensive, though. It costs approximately $350,000 to run the USF2000 season.

“I’m glad it is as expensive as it is because it weeds a lot of people that just want to play,” Jack Miller said. “We want serious racers out there. We want people going for the same goal of running in the Indy 500. It weeds out a lot of people as you go up.”

The Road to Indy cars and costs

Cooper Tires USF2000 Championship cars are powered by Mazda engines and run on Cooper Tires. Typically, there is one mechanic and one engineer per car, which reach top speeds approaching 130 mph.

The top of the ladder before IndyCar is the IndyLights Presented by Cooper Tires. Cars race at more than 200 mph. Cost to run the season is approximately $1.4 million.

“We own our own team. We are not doing it for a living like a lot of teams do. We own everything,” Jack said. “Starting out with the semi-truck and trailer, all equipment and everything, was well into $1 million just to have the base set up to start running a team.”