Without Dave Dugan and Paul Mendenhall, the parade wouldn’t be the same. 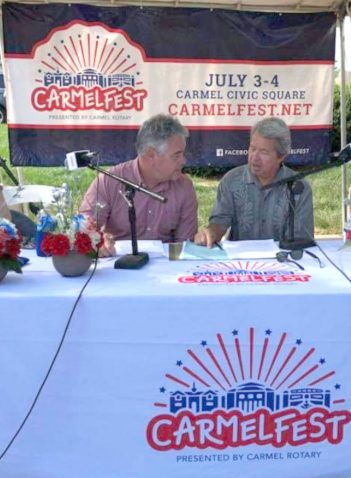 Paul Mendenhall, left, and Dave Dugan have served as announcers for the CarmelFest parade since 2003. (Submitted photo)

At the parade review stand, Dugan and Mendenhall have announced the parade side-by-side since 2003. In 2018, the review stand was moved to its new location on Carmel Drive.

“I thought it would be more fun if there were two commentators to play off each other,” Dugan said. “The concept was approved, and I was glad that my long-time friend Paul Mendenhall was up for joining the broadcast. Paul, I knew, would be perfect at it and hopefully we balance each other out well.”

Dugan and Mendenhall attended Carmel High School and launched their broadcasting careers as part of the high school radio team at WHJE.

As parade announcers, they work closely with Hal Espey, a former CHTV adviser who is in charge of filming the parade.

“For me, getting up on the Fourth of July, calling the CarmelFest Parade with Dave is as much a great tradition as going to the Indy 500,” Mendenhall said. “I absolutely love it and look forward to this year.”

Although Dugan and Mendenhall have witnessed several iconic parade moments, they agree that the Civil War re-enactment is one of the most thrilling parts. The parade has honored the military through the inclusion of World War II and Korean War veterans as grand marshals, military jet flyovers and the RE/MAX Legends Military Tribute Grand Finale.

The parade begins at 10:30 a.m. July 4. All parade applications must be submitted by May 31. Those interested in auditioning for CarmelFest Has Talent must submit their application by June 14. To register, visit carmelfest.net.