Gabriel Grant wishes the goals of company executives and workers would always be aligned.

Unfortunately, that isn’t the case in an increasingly polarized society.

“I want the need to disappear, but the need is more prevalent than ever,” Grant said of his mission. 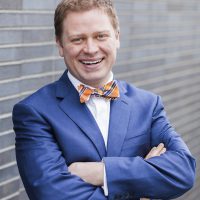 Grant, a 1999 Carmel High School graduate, and Jason Jay co-wrote “Breaking Through Gridlock: The Power of Conversation in A Polarized World” in 2017.

“My work took a shift from how I support sustainability leaders, directors and teams to how I create the culture within organizations that would support sustainability, leaders and teams,” said Grant, who lives in Seattle with his wife and two daughters. “My emphasis now is organizational culture change, which could include university or educational systems that propagate those tools out to a greater population.”

As founding partner of Human Partners, Grant focuses on culture consulting and coaching with executives.

“We will design engagements that are specific to a given organization and the cultural shifts that they want to create,” Grant said. “I’m really interested in how people express purpose and how that gets expressed through people’s work in organizations. Part of being able to pursue your purpose and do purposeful work is to share what you value with people who don’t already agree with you.”

That starts with the company leadership.

“It’s really hard to shift the culture of the company without a personal transformation at the level of the executive,” Grant said. “So, how do I work with the executives to role model the shift that is being sought out within the organization?”

Grant said that requires people determining how are they going to contribute and having conversations about changing the way they do things.

“It’s creating that at a cultural level. People are viewing how the world could be and then what they can do and who they need to be to get up there,” he said. “My research at Yale focused on how individuals and organizations flourish in the pursuit of planetary flourishing.”

Grant said people are suffering in organizations because they don’t feel they share the same purpose as the organization.

“You could have factions within an organization where you have the do-gooders versus the capitalists and they are battling it out,” he said. “So there is the frustrating upset between what can literally be two halves of the organization.”