Fishers High School linebacker Geoffrey Brown is building a name for himself.

Brown was selected as one of The Griddy Awards’ Prime Time 25 selections, recognizing the top juniors in the state. Brown will be featured on the 2019 Indiana Football Digest cover with the other top juniors.

“It shows my hard work has paid off and I am recognized for what I’ve done or will do in the future,” Brown said. 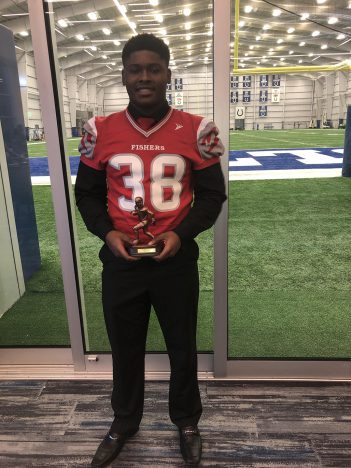 Brown was honored at the 2019 Griddy Awards Banquet, which was held April 28 at the Indiana Farm Bureau Football Center, the Indianapolis Colts practice facility.

Brown became a starter halfway through his sophomore year. As a junior, Brown led the Tigers with 112 total tackles, including 88 solos. The 6-foot-1, 220-pounder had 16 tackles for loss, five quarterback sacks and a school-record seven fumble recoveries for a single season.

“He’s among our career-leading tacklers with a season to go,” Fishers coach Rick Wimmer said. “He’s very active. He gets to the football quickly. He diagnoses plays very quickly and reacts. When he hits them, guys usually go backwards. He’s a very physical player.”

Brown said he made significant strides from his sophomore season.

“Since I’m the (middle linebacker) I have to call the plays, so I have to remember that and where everyone is supposed to go,” Brown said. “I read plays better and get to the ball faster.”

The Prime 25 is based on onfield performance, academics and community work. Brown, who has a 3.6 grade point average, assists with the school’s youth football and basketball camps.

“He’s a great young man, a good worker and good student,” Wimmer said. “He’s a guy that can play at a pretty high level.”

Brown said he has received a lot of interests from various college football programs, including Ball State, Bowling Green, Miami of Ohio and University of Cincinnati. He has an offer from NCAA Division II Northwood University.

“(Coaches) would like to see him at camp and to see him run and see how he moves, which they can see at evaluation camps,” Wimmer said. “That will be important for him this summer.”