You are at:Home»Current in Carmel»Carmel Community»Carmel’s Mercy Road Church expanding in three directions

Mercy Road Church has been expanding its numbers since its inception. Now, it will expand its reach in the Indianapolis area.

The Carmel church has been inside the former Borders bookstore at 2381 Pointe Pkwy. Near 116th Street and Keystone Parkway since December 2015.

The church plans to open its second location in the former ITT Technical Institute building this fall at 9511 Angola Ct. in north Indianapolis near 96th Street and Michigan Road.

Other new locations are planned on Massachusetts Avenue in Indianapolis, as the church plans to lease the Atheneum and at a yet-to-be determined site in Fishers.

“We’ve kind of outgrown our space and we are sending them out in three different directions,” said Husmann, a Carmel resident. “We’re calling them locations now. Within five years, they’ll share the Mercy Road name, visions and values but be separate churches.”

Husmann and his wife, Lisa, founded the church in 2011.

The upstairs is a separate nonprofit called Nexus and co-working space. 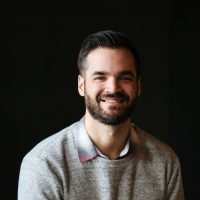 Carmel resident Luke Edgerton, a 2005 Carmel High School graduate, is the pastor of what the church calls the Michigan Road location.

“The Saturday night service is dedicated to the Michigan Road (congregation),” Edgerton said. “It’s as if we were having a service at Michigan Road (but) it’s just at Keystone. We’ll have two services Sunday morning when we get to the new location. Every single day we’re involved with new families who want to be a part of church planting.”

“We hope to grow that to 300 in the next four months,” Edgerton said.

Edgerton has been with Mercy Road Church for 3 1/2 years. He previously was a youth pastor at Traders Point Christian Church and a pastor in Mesa, Ariz., for a few years before moving back home to Carmel. His wife, Ashlee, grew up in Carmel as well. Ashlee, a Heritage Christian graduate, is a mental health therapist at Indiana Health Group.