You are at:Home»Current in Carmel»Carmel Community»The Agreed aims for progress through political agreement

For many, the word politics is synonymous with fighting, discord and mudslinging.

But to Bill Keller, it doesn’t have to be that way. The Carmel resident has helped launch a grassroots movement called The Agreed, based on his belief that most people naturally get along and are working toward the same goals. 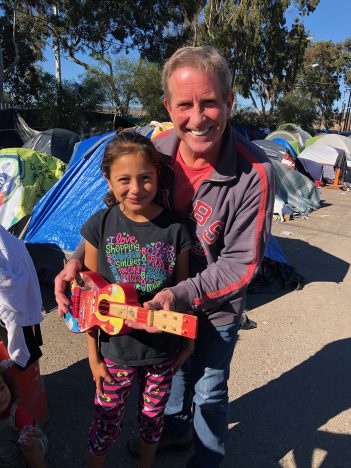 Bill Keller pauses with a girl he met during a visit to speak with people in the Migrant Caravan in late 2018. (Submitted photo)

Keller, who is semi-retired from a career in business development and specialty project management, wrote a book called “Agreed!: How to not let things we disagree on stop us from accomplishing the goals we do agree on!” in 2018 and launched a discussion group of the same name. Keller plans to send the book – which can be downloaded free at theagreed.com – to all elected politicians in the state legislature and Congress.

So far, the group has mostly focused on national issues such as health care and immigration, but Keller said its members are open to helping people process divisive local issues. Its focus will likely change as the group members do.

“It’s definitely grassroots. We don’t know what it’s going to be,” Keller said. “Each meeting we get a little closer on our guiding principles and mission statement, but we’re not very close to a mission statement.”

The group aims to gather firsthand information whenever possible. Keller visited the Migrant Caravan near Tijuana late last year, soon after the Trump administration made news for using tear gas to stop people from crossing the border. He met with migrants and plans to share about his experience at the group’s June meeting.

Keller said he didn’t want anything to do with politics for most of his life, but he’s open to running for office as an independent someday, if that’s what the group wants.

Mostly, Keller hopes that The Agreed helps people stop making negative – and usually wrong – assumptions about others and the world in general.

“People think sometimes that (other) people came to their (different) views from something unethical or immoral, but it’s simply a different path,” Keller said.

Keller suggests to participants that they take two weeks off from watching the news and scrolling through Facebook, take a homeless veteran to breakfast and meet 10 strangers.

“You will have a totally different view of the world,” he said.

The Agreed will next meet at 6:30 p.m. June 17 in the Sophia Square meeting room, 110 W. Main St. in Carmel, to discuss immigration. Group founder Bill Keller will show videos of his visit to the Migrant Caravan in late 2018. Learn more at TheAgreed.com.