You are at:Home»Current in Carmel»Carmel Cover Stories»Game on!: Evolve Youth Esports helps kids from Carmel, beyond chase dreams

Twelve-year-old Dawson Newman already has a career goal in mind: To become a pro gamer.

“I have played video games with my dad since I was really little,” the sixth-grader said. “I started getting into gaming more seriously when I was 8 and saved my money to buy a PlayStation 3.”

Although making a career of playing video games might have seem farfetched not so long ago, thanks to Carmel-based Evolve Youth Esports, Dawson’s dream could become reality.

Evolve is the brainchild of Scott Wise, who founded Scotty’s Brewhouse.

“After I sold Scotty’s (in 2016) and was figuring out what I wanted to be when I ‘grew up’ and was turning 45, I noticed my kids were always playing Fortnite,” Wise said. “And, like any parent coming from the generation of ‘get outside and play,’ I just wanted them to get out of their room. But, the more I watched, I saw them communicating with all their buddies on the team, and that is where it started.”

Wise partnered with Player One Esports and opened Evolve in Carmel in January. It offers esports leagues for boys and girls ages 9 to 14 of any skill level. The eight-week season has weekly practices at the Player One arena, games on Saturdays and a season championship. Players like Dawson even have the potential to make a career out of gaming.

Dawson’s mom, Tracy, saw an ad for Evolve on Facebook. Knowing gaming is her son’s passion, she made the commitment to make the two-hour drive from their southern Indiana home to Carmel.

“As a parent, you want to find every opportunity you can to support your child’s goals,” she said. “We get some crazy looks when we tell people what we are driving two hours to do. We traveled just as far for baseball. Why not do it for eSports? He has goals to be a pro gamer. We feel Evolve is helping him grow and giving him more opportunities to learn about the world of gaming firsthand.”

Evolve also gives Dawson, who is homeschooled, the chance to meet new people, including those in the gaming industry.

“Evolve allows the kids to play together in person and work together as a team,” Tracy said. “They have wonderful coaches there to help them when they have questions about the game that maybe mom and dad can’t answer.”

“As of today, over 125 colleges are offering scholarships for esports, and it’s continuing to grow,” Wise said. “Today’s video games are not yesterday’s Atari. And you don’t have to be a gamer. You could work for a gaming company or create songs for games. I feel there are so many opportunities wrapped around this.”

The first season at Evolve drew around 125 youth who concentrated only on Fortnite. The Dawson’s aren’t the only family from outside the Carmel area traveling to Evolve, as two families drove from Greenwood twice a week, two other families came in from Louisville, and one family came from Chicago.

“And that was without marketing and told me we need to grow this thing and see it go across the country,” Wise said. “I was a kid who was small and meek, and so because of that, I could try to play sports but was not strong enough or quick enough. But now, esports leagues are opening the door for kids like me who got picked last in the playground kickball game, so maybe that kid is the best Fortnite player and now they are playing a video game with the captain of the football team.”

Season 2 is expected to draw approximately 200 players who will play not only Fortnite but also NBA2K and Super Smash Brothers. Evolve also is planning a five-week summer mini season starting July 8 that includes a $2,000 prize tournament.

“We are extending practice times to two hours during this mini season to give parents the opportunity to fill their kids schedule during the summer months,” Wise said. “We will be offering four games to choose from: Fortnite, Super Smash Bros., Rocket League and FIFA.”

Cost for the mini season is $150. For more, visit evolveyouthesports.com. 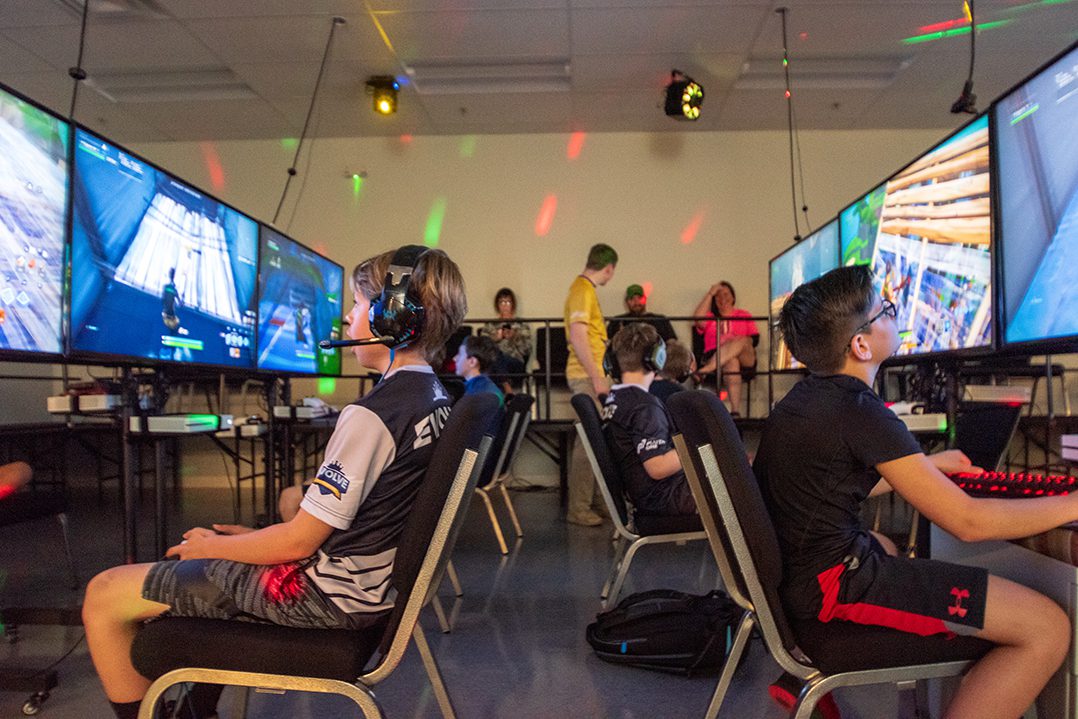 From left, Slater Wise of Indianapolis and Joshua Beauchamp of Fishers practice at Evolve Esports in Carmel. (Photo by Ben Stout)

Esports by the numbers