You are at:Home»Current in Westfield»Westfield Cover Stories»Creating a road: City to improve, extend Jersey Street in downtown Westfield

To the dismay of some residents, early renderings of Jersey Street improvements framing the northern border of the Grand Junction Park and Plaza showed proposed businesses replacing existing homes on Jersey Street between Poplar and Mill streets.

City officials, however, say that is not the case. They said the renderings in are merely conceptualizations of what the area could potentially look like. The only property to be altered because of Grand Junction Park and Plaza construction is be the city-owned building on the corner of Union and Jersey streets, which used to house the Westfield Washington Historical Society. 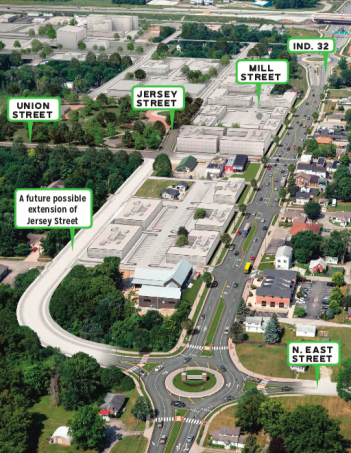 A rendering of the Jersey Street extension. City officials say the rendering is a concepulization and not necessarily reflective of the final project. (Submitted image)

Improvements also are proposed to Jersey Street between Mill and Union streets, and an extension is expected from Union Street to East Street. The projects are funded seperately.

When the projects are finished, the city will have the ability to close off that portion of Jersey Street to vehicular traffic during events or festivals, similar to Delaware Street in downtown Indianapolis.

“It was designed and will be constructed to be an expansion of the plaza itself, so when we have events like the farmers market, the mayor’s ball, food truck events, it will close in that portion between Mill and Union and open up to pedestrian traffic,” Director of Public Works Jeremy Lollar said.

“The extension from Union to East Street does not exist currently. It is a portion of the State Road 32 project, but it is a locally funded portion,” Lollar said. “So, they have those two construction projects working together, planned together, but the Jersey piece is not part of the State Road 32 funding strategy.”

The Jersey Road expansion is estimated to cost $1.4 million. Lollar expects the expansion to be one lane in each direction with turn lanes, although it is still early in the planning process.

“It’s to create better access through downtown. It’ll also create a better economic corridor through there,” Lollar said. “So, the East Street roundabout as part of the State Road 32 project, this will tie into that so there’s a southern leg.”

The extension will allow for business development frontage on Jersey Street and Ind. 32.

Although there are no proposals, city officials expect development to feature retail and office space on the first floor with multi-family residential options on the second floor. 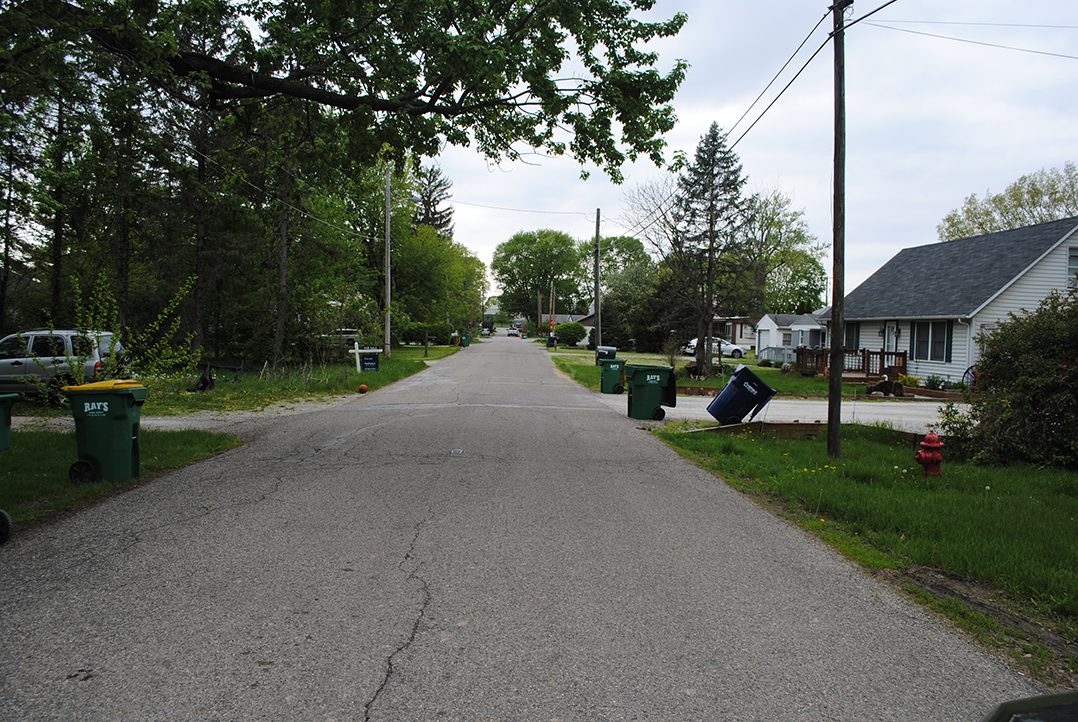 The first part of Jersey Street construction will involve improvements to the street between Mill and Union streets. (Photo by Anna Skinner)

Andy Warner and his wife, Kim, have a home on Jersey Street between Poplar and Mill streets. When they moved in, the home was quaint an almost country-living feel.

With Ind. 32 traffic and increased business development nearby, that’s no longer the case. The Warners expect traffic along Jersey Street in front of their home to further increase when Ind. 32 construction begins as drivers try to avoid the hassle, even though Ind. 32 isn’t expected to see a complete closure during the construction.

“We moved here because there were houses in the front and my yard is one of the biggest yards on this road. It was kind of country-ish,” Andy said. “Now, they opened (the northern residences) up and tore those houses down five years ago, so now we hear and see 32 (traffic).”

“I wanted that little hometown feel. It was quiet. I feel I live more in the city with the traffic now than I did when I lived in downtown Indianapolis,” she said.

“This is becoming more of a metropolitan business-type area,” Andy said. “That’s what it’s going to be. It’s doing away with the small-town feel, which is kind of depressing. A lot of people like us moved here for that feel, and it is going away and it’s just growth. I don’t think there’s anything anybody can do about it.”