In the center of the city’s oldest park, the 1920s carousel, Little Beauty, and its recent facelift will be unveiled this weekend, showcasing its most expansive set of changes since its arrival at the park more than two decades ago.

Since 1996, residents have been able to take rides on Little Beauty, but Noblesville Parks Director Brandon Bennett said the area will be more active and become the hub of the park as the city and parks department take over operation of the carousel, concession area and Tom Thumb Putt Putt course. Bennett said a third party has traditionally handled the operation. 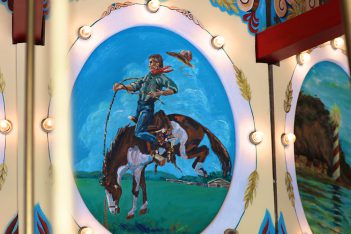 Murals all across the carousel were restored by local artist Scott Shoemaker.

“By operating the facility, we hope to be able to offer more to visitors to Forest Park and make it the hub of activity in the future,” Bennett said. “We plan on offering more in the way of concessions, including soft-serve ice cream and also having the ability to sell ice to the public and provide a concierge service to those groups using the facilities in the park. We hope to have supplies for some of the amenities that the public can use, such as bocce balls, cornhole bags, horseshoes and balls for use in our amenities.”

What is now the concession building formerly was an indoor shooting range and arcade, Bennett said. But when the carousel was installed in the 1990s, the building was renovated to make room for the carousel and concession area.

Bennett said a shelter or a type of gathering space for parties also is planned.

“Everything on that corner has some historical and unique significance from the early 1900s, so (the Noblesville Parks Foundation) wanted to pay homage to that area by enhancing it and better utilizing it as well as being that destination for people to enjoy their leisure time,” Bennett said. “The Tom Thumb Putt Putt Course is one of only a few left in the country, so it is a significant feature that we hope to bring more attention to.”

The carousel isn’t technically city property, but the owner, Historic Amusement Foundation, Inc., an Indianapolis-based nonprofit, has helped the parks department make the improvements and eventually plans to transfer ownership to the city within the next few years, Bennett said.

The carousel has undergone significant restoration by the Noblesville Parks Foundation, including the repainting of murals by local artist Scott Shoemaker. The concession building has a new serving window along with new flooring, countertops, paint and a soft-serve ice cream machine.

The changes are the start of a larger plan to make enhancements park-wide, Bennett said.

“Dependent on fundraising and capital support, we hope to build a shelter and a trail connecting the restroom and playground to Carousel Corner, create an amenity for parties and adult gathering space in the fenced-in green space where the airplane ride used to exist, relocate the basketball court and add signage and entry points to the area,” he said. “We also hope to add a small sound system for movies and music as well as potentially an outdoor fireplace in that area.”

Bennett said long-term plans include incorporating the train yard back into the park and creating trail connectivity to Federal Hill Commons and Legacy Christian School.

“I think this is a rather unique opportunity to look at some historical elements in the park and further enhance and celebrate the opportunities in Noblesville for our citizens,” Bennett said. “This is not the type of project many departments get the opportunity to work on and help to enhance. We have the opportunity to truly enhance a space that has some great features, but we want to take it to the next level and bring more opportunity and highlight these great amenities.” 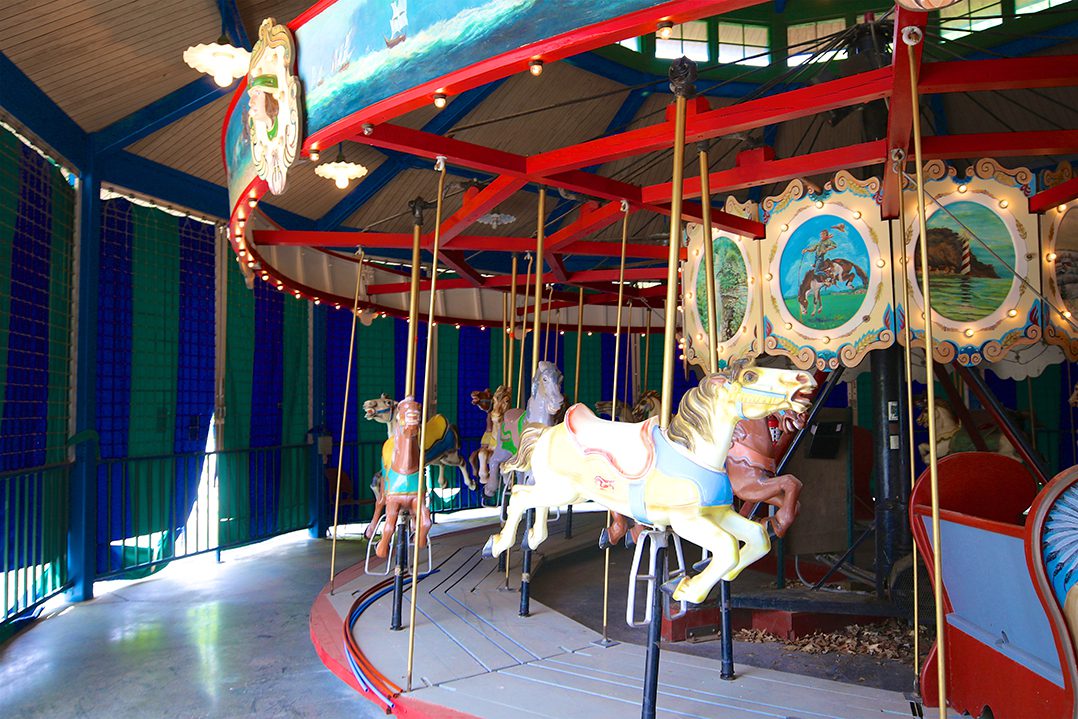 Improvements
to the 1925 Little Beauty carousel by the Allan Herschell Co. will be unveiled May 17.

The history of Little Beauty

The 32-foot Little Beauty carousel was built in 1925 by the Allan Herschell Co. and was one of the smallest, full-sized merry-go-rounds constructed in its era, according to Brett Johnson from Historic Amusement Foundation, Inc., an Indianapolis-based nonprofit.

“It is not a kiddie ride,” Johnson said. “Designed to be a traveling machine used in carnivals rather than amusement parks, this machine was operated by the J.J. Page shows based in Johnson City, Tenn., from the late 1920s through 1951. We think it was set up one last time in Johnson City in 1953, then put in storage.”

Johnson said the ride was donated to Historic Amusement Foundation, Inc. in the mid-1980s and restored by Tom Wade, a professional wood carver from Indianapolis.

“Fifteen of the original wood horses, most at least partially restored, are in storage,” he said. “Ten are currently with the (Noblesville Parks Dept.) for promotional use, with aluminum A-H style horses installed (on the carousel). The wood horses require constant maintenance, so this choice was a practical, as well as economic, decision. The appearance of the machine is much like it would have been when constructed, except it is fitted with solid ‘park’ platforms. All of the original wood structural elements were replaced with nearly all of the original metal pieces restored and in use. It was purposely not over-embellished.

“The horse poles and platform hangers were originally covered with brass sheaths. Once again, not installed for practical reasons. The original motor was replaced and soft-start installed.”

The music that plays when the ride operates is similar to carousel’s original era. It is a recorded track that plays through a speaker system. In the carousel’s early days, organs were used.

“These machines would require constant tuning and maintenance as well as being very loud,” Johnson side.

A normal carousel ride cycle is three minutes running and two minutes unloading and reloading for 12 cycles per hour. Johnson said, at capacity, Little Beauty, with 20 jumping horses and two chariots, has a capacity of approximately 25 people per cycle, or 300 people per hour.