U.S. Sen. Todd Young visited Carmel High School on May 11 to discuss the Tobacco to 21 Act, a bill he is co-sponsoring with Senators Brian Schatz, Dick Durbin and Mitt Romney. 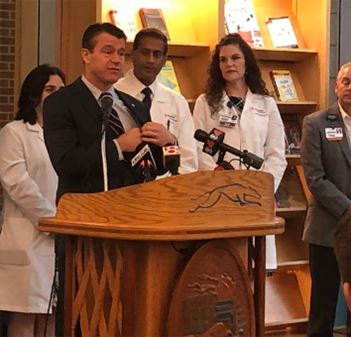 This bill would raise the minimum smoking age in the U.S. from 18 to 21 years old. Young said that along with a change in culture, U.S. policy should change as well.

“The world has changed a lot, our culture has changed quite a bit, and our understanding of the public health implications of tobacco usage has changed considerably since (I graduated from CHS),” Young said.

The senators want to take action to end the prevalence of smoking among American adolescents in response to the recent spike in the usage of JUULs and other vaping devices.

Young said it is crucial that Americans are cognizant of the negative effects of tobacco use and the extent to which it plagues the U.S.

“Our parents understand this, so many of our students and administrators and teachers understand it. I want the entire nation to understand,” he said. “We have a national epidemic on our hands.”

Young said raising the smoking age would be extremely beneficial to the nation.

“Public health experts indicate that the most important thing we can do at a federal level, the most achievable and impactful policy measure we can take is to simply raise the smoking age to 21,” Young said. “It will reduce healthcare costs at a time when Americans are insisting we bring down healthcare costs.”