You are at:Home»Night & Day»Entertainment News»Lurie features unique exhibit
A year ago, Susan Brewer was hired to be a curator at Evan Lurie Gallery in Carmel.
“I’m an artist and I’ve had work at the gallery since 2013. Evan wanted to bring more local artists in to get that footprint,” Brewer said. “The shows he does on the road are huge productions. His stable of international artists do amazing arts, but this brings a different facet into the business in Carmel. This is my third exhibit and one that pulls in these different artists that are connected through their collaborations as a means of working and I find it a fascinating new direction for the gallery. 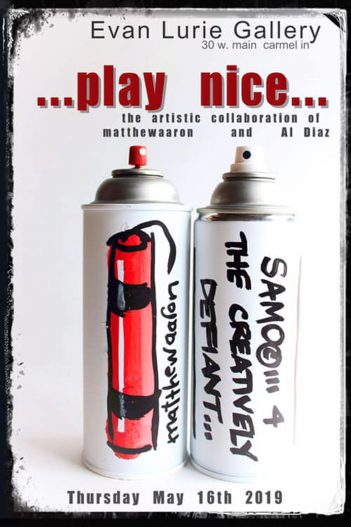 “Matthew Aaron is locally based and his background professionally is that of a photographer, musician and songwriter. I think there is a natural progression as an artist due to his background that contributes to a rich visual language.”
The exhibit featuring Aaron, an Indianapolis visual artist, and Brooklyn-based artists Jilly Ballistic and Al Diaz, opens with a reception from 5 to 10 p.m. May 16 at the gallery, 30 W. Main St. The exhibit runs through the end of June.
Brewer said Aaron was always fascinated by the work of Jean-Michel Basquiat and began collaborating with the Brooklyn artists in this exhibit to develop that process. Aaron also has a collective in London he is working with as well.
Aaron begins his collaborations with Ballistic by painting the background and then adds Ballistic vintage figures, Brewer said.
Diaz published a book last year about 40 years of graffiti and street art. The book, “SAMO(c)…Since 1978…,” documents his beginnings as a street artist with teenage friend Basquiat.
Basquait, who collaborated with Andy Warhol. Basquait died at age 27 of a heroin overdose.
“Matt made a cold call to Diaz and asked about working together as collaborators to produce a body of work,” Brewer said. “Al told me he gets a lot of these calls but this kid had something that sparked his interest and he wanted to work with him. As a curator I’m excited about this exhibition because it should spark people’s interest in the processes of these artists. This is not an academic approach to making art. This is a visual story that speaks volumes about the times that we live in.”
Lurie said he views the exhibit as an important one for Carmel.
“It’s reminiscent of the art that Basquiat and Warhol were doing in the ‘80s. It draws you back to that,” Lurie said. “That deconstructive, primitive approach to contemporary art, it’s a child-like approach to art that we can relate to as adults. It brings us back to our roots.”