You are at:Home»Current in Fishers»Fishers Community»HSE Schools students to compete in Destination Imagination global finals

A group of students from Brooks School Elementary and Fall Creek Intermediate will participate in the Destination Imagination Global Finals May 22-25 in Kansas City, Mo. DI is a nonprofit that promotes hands-on learning through challenges that test kids’ creativity, problem-solving and project-management skills. 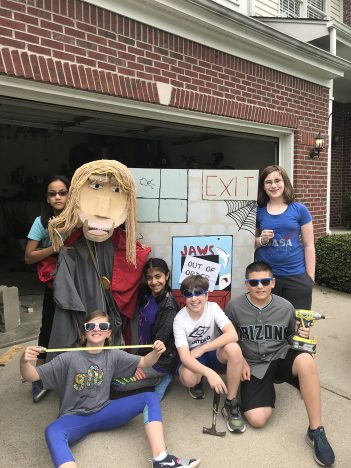 The team Smooth Like a Waffle was formed three years ago. Members are Maya Hayes, Mia Henderson, Diya Parikh, Cameron Henderson, Max Weinberger and Emma Hayes. In February and March, the team participated in the Destination Imagination regional and state tournaments in the Fine Arts Challenge: Get Your Game On.

“The kids had to research a game, explain the development of it and also create a game gizmo,” team manager Jill Henderson said. “They chose the whack-a-mole game. Our gizmo is levers that push the moles up from behind.”

The team name was coined after a joke between teammates.

“The first year they made a joke in their skit and about how clumsy or awkward someone was, and one of the kids said the person was smooth like a waffle,” Henderson said. “They all just thought it was hilarious and it stuck.”

Students have taken the feedback they received at the state and regional finals to tweak their presentation.

“They’ve upped their game by adding a couple of changes and added more history of the game,” Henderson said.

Teammates look forward to the next level of competition.

“They think it’s the greatest thing ever,” Henderson said. “It’s like a mini Super Bowl show. They fill a whole arena and have a parade of states and countries. They’ll have the opportunity to meet kids from other countries.”

Smooth Like a Waffle finished 15th at least year’s finals.