You are at:Home»Current in Carmel»Carmel Community»Holocaust survivor shares story at Carmel remembrance ceremony

And as many times as she tells her story of surviving the Holocaust, it just gets harder for the Geist resident. 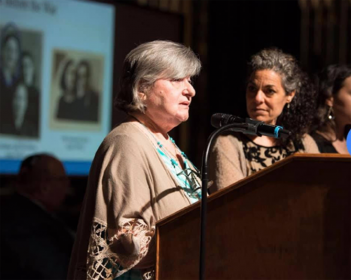 “It’s like opening a wound and pouring salt on it each time I tell it,” Davidson said.

Davidson, however, knows it was important to tell her story again May 3 at the City of Carmel’s Holocaust Remembrance Ceremony at The Tarkington at the Center for the Performing Arts.

“I lived in Europe when the Nazis tried to kill all Jewish people as well as others they found unworthy,” Davidson said.

Davidson was born in February 1941 in Poland. The Nazis invaded Poland in September 1939.

Davidson showed a picture of her mother and 10 brothers and sisters.

“Several of her brothers and sisters were married and had children when the war started. My mother was the only one who survived,” Davidson said. “My mother changed her name to Nellie to sound less Jewish, wore a cross and passed for Christian during the war.”

After Davidson was born, her mother protected her by giving her to an older Christian woman named Reba, who claimed her as a grandchild.

“I wore a crucifix and I went to church with Reba every Sunday,” Davidson said. “She gave me to Reba so if she was caught, I might remain safe. Understand that Reba was taking her life in her hands when she took me in. The Nazis didn’t treat people that helped Jews any better than they treated the Jews themselves.”

Davidson’s father was one of seven children. Some were married with children. Her father, his brother and one cousin were the only survivors on his side.

“My father survived by hiding in the forest and living the best he could off the land,” Davidson said. “He told me one day he had to steal food and clothes when he was hiding and he did while he was crying. Other than that it’s not a period of time he discussed.”

Her parents came to get Davidson, then 4 years old, following the war. She was crying and didn’t want to go because they were strangers.

“Reba explained to me this was my mommy and daddy who loved me very much and I should go with them,” Davidson said.

Davidson and her parents ended up in a Displaced Persons Camp in Germany.

“The last of the Displaced Persons Camps closed in 1959. It took Europe 15 years to recover from the hell that preceded it,” Davidson said.

Davidson and her family, including a brother born in 1947, were there until 1949 when they immigrated to the United States.

Fields’ daughter, Naomi Fields, a Clay Middle School seventh-grader, said it will one day be her responsibility to share her grandmother’s story.