You are at:Home»Current in Carmel»Carmel Community»Carmel seventh-grader takes second in state Geography Bee

An atlas helped Lindsay Brandt develop her love for geography and writing.

“I had an atlas and it had bunch of pictures in it, and I would make stories to go with the pictures,” said Brandt, who loves creative writing and wants to have a writing career. “I think that might have gotten me interested in geography.” 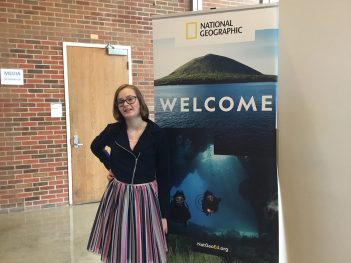 Brandt, a homeschooled seventh-grader from Carmel, placed second in the Indiana Geography Bee March 29 at IUPUI. She earned $300 in cash and a $15,000 scholarship that can be used only at IUPUI.

“I was really excited,” Brandt said. “At the beginning of the day, my goal was just to get to the top 10, and I didn’t think it was a realistic goal.”

“I qualified for the state before, but both times I did pretty badly,” Brandt said. “I think I got lucky. The questions were harder than last year, so I either got a lot luckier than last year or a lot smarter.”

There are eight questions in the questions round. The top 10 advance to the next round.

“I was one of only three people out of 100 to get all eight questions right to make the top 10,” Brandt said.

Brandt said there is a round with a map where participants must identify the location on the map.

“If you get two questions wrong in the top 10 round, then you are eliminated and you do that until there are only two people left,” Brandt said. “There were some cases where I made very educated guesses.”

Her mother, Kate Burkhardt Brandt, said it was exciting to watch.

“We thought the questions were harder this year than in the past,” Kate said. “There are categories like which country is farther north or south, or which is at higher elevation. For instance, is Indianapolis or Prague higher in elevation?”

“She does some of her homeschool classes (at Westfield Library) and some through a co-op in Indianapolis where we meet on Wednesdays,” Kate said.