You are at:Home»Current in Carmel»Carmel Community»Carmel Scout overachieves on way to earning Eagle rank

A Boy Scout since first grade, Jackson Pasheilich has been working his way through the ranks for the past 10 years. Now, as a sophomore at Carmel High School, he has earned the highest rank of Eagle Scout. Only 4 percent of Scouting’s national membership attains the rank of Eagle, according to Gina Strati, a spokesperson for the organization. 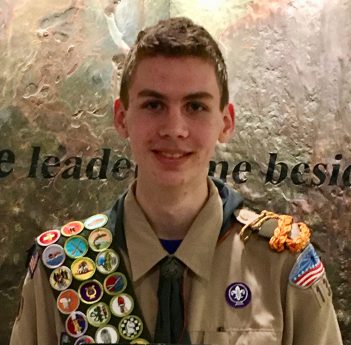 Twenty-one merit badges are required to achieve Eagle status, but when Pasheilich received his rank he had 46. He has since earned two more, and after he completes a 61-mile hike over 10 days in New Mexico this summer, he will earn a Backpacking merit badge, his 49th.

Through scouting Pasheilich has grown to love adventure and trying new things. He enjoys camping, and one of the coolest skills he has learned is how to tie a variety of knots, he said. But for his Eagle project, he knew he wanted to put the building skills he had developed to good use.

With help from the Hamilton County Parks Dept., Pasheilich identified the need for a new, pedestrian-friendly gate to protect the fields at the Bray Family Homestead from cars. It took him and eight volunteers about 6 months to finish the project, which spans more than 20 feet and opens to give maintenance vehicles access.

His Eagle project has been the biggest challenge he has faced in Scouting yet. It taught him that not everything goes as planned and how to adjust on the fly, he said.

“My favorite part of the Eagle process was seeing my project go from idea to completion,” he said.