On April 13, U.S. Marine veteran Daniel Quinn, 90, had the opportunity of a lifetime. He was among the veterans in an Indy Honor Flight, which flies veterans to Washington, D.C., to view the war memorials built in their honor. 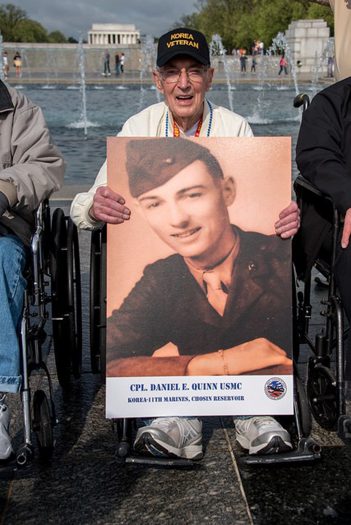 Quinn’s daughter, Sandy Burton, said when she was growing up, the family wasn’t aware of the history Quinn was part of.

“My dad enlisted in the Marine reserves with a friend who convinced him to do that for a little extra money, and the next thing they knew they were heading to Korea in a war,” Burton said. “They didn’t really get any boot camp or anything. They pretty much learned to shoot their guns on the ship on the way over.”

Quinn was in Korea a short time and fought in the Battle of Chosin Reservoir, better known as “The Frozen Chosin,” in which a combined 30,000 American and United Nations forces were surrounded by more than 120,000 Chinese soldiers and had to fight their way out in bitter cold temperatures.

“The war goes on, and he comes back home and basically just goes back to work. None of us knew any of this history,” Burton said. “He didn’t ever talk about it, but I noticed he’s in this group called the ‘Chosin Few.’ He meets once a month with some of his friends from that era.”

Burton said the Indy Honor Flight gave her dad an opportunity to be around other veterans.

“It’s really an emotional day. They did such a great job with the veterans in transporting them,” she said. “It was really an amazing day. He loved every minute of it.”

Quinn and Burton live in Fishers.

“We got to Washington, D.C., and landed and exited plane, and there were, I couldn’t even tell you, how many people there cheering for (the veterans) and shaking their hands and welcoming them to D.C.,” Burton said. “When we were looking at the monuments, random people would walk up and shake their hands and thank them for their service. It was so heartwarming. The mission is to let these veterans know they’re not forgotten. It was just a really great day.”