You are at:Home»Current in Noblesville»Noblesville Community»Ditslear honored at Arbor Day ceremony

For 29 consecutive years, the City of Noblesville has kept its Tree City USA designation from the Arbor Day Foundation. 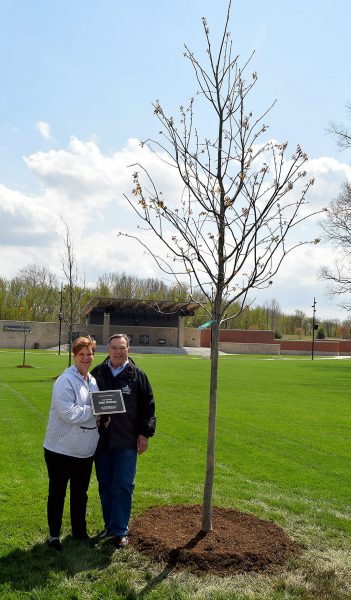 The recognition is given annually near Arbor Day, the last Friday in April, to cities with a commitment to effective urban forest management, including four requirements – a city tree board or department, a tree-care ordinance, an annual community forestry budget of at least $2 per capita and an Arbor Day observance proclamation.

“Being a Tree City USA member for almost three decades shows the importance that the city and its citizens have for our environment and its sustainability year after year,”  Noblesville Mayor John Ditslear said. “I also want to thank the Noblesville Tree Board for its overall care of city street trees and the educational outlet and projects it provides our residents.”

In the last year of his last term before retirement, Ditslear was honored April 26 at Federal Hill Commons, where a red oak tree was planted and dedicated in his name for his 16 years as mayor.

To continue celebrating Arbor Day, Noblesville Tree Board members will attend the May 4 farmers market at Federal Commons from 8 a.m. to noon to distribute free black gum tree saplings and other gifts and tree information.