You are at:Home»Current in Geist»Geist Cover Stories»Creating a conservancy district: Geist residents aim to protect reservoir, others concerned about tax hike

Plans for establishing a conservancy district for Geist Reservoir has raised concerns among residents, lake visitors, fishermen and boaters. Matt Troyer recognizes there are plenty of misconceptions with the proposal.

In order to move the proposal’s process along, the Indiana General Assembly needed to pass a bill creating an agreement between Citizens Energy, the reservoir’s owner, and the conservancy district. However, the bill did not move forward after the April 25 IGA meeting.

“After we have an operating agreement (with Citizens), we will go forward to the courts when we file our petition, which includes the signatures, proving the need, the cost benefit, the engineering study, to form the CD,” Geist Lake Coalition President Brian Hall said.

If an agreement with Citizens Energy passes, the proposal must then pass through the Hamilton County Courts and then the Natural Resources Commission makes the determination to establish the conservancy district.

Geist Marina Limited posted on its Facebook page on April 9 that the taxes would go into effect July 1. Hall said that’s not true.

“It takes 12 to 24 months to form (the conservancy district) and another year after that before you see it on your property tax bill,” Hall said. 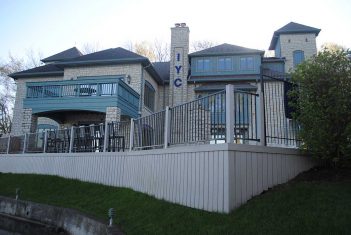 The proposed Geist Conservancy District expects to have a $2 million budget for a clean-up initiative for Geist Reservoir. (Photo by Anna Skinner)

The Geist Conservancy District has a proposed budget of $2 million to clean up the lake through various methods, such as dredging or shoreline remediation. While those opposed to the conservancy district are concerned taxes may get out of hand in the future due to no property tax cap within conservancy districts, Geist resident Keith Mathews said he believes the opposite will happen.

“The way I foresee it is, five years down the road, once it’s established and we get a handle on the lake, we are done dredging and there’s less treatment. I see it (the tax) decreasing as opposed to increasing,” he said.

Although members involved with the opposition also want a clean lake, they’re not sure if a conservancy district is the best way to proceed. Boaters and anglers are concerned about being taxed to operate a motorized watercraft on Geist Reservoir in addition to paying launch fees.

“I fished this lake when I was 6 years old for the first time and caught my first bass,” resident Greg Evans said. “That was my fun. It kept me out of drugs, kept me out of alcohol. I want to be able to share that with children, with the new generations, to give them the excitement.”

Others are concerned about the conservancy district retaining the power of eminent domain, though Troyer said the district has no plans to initiate it.

“The CD has no current plans to use eminent domain in any way, shape or form, but it’s hard to figure out when you set up a government agency what you might need it for,” Troyer said.

Troyer and Hall said eminent domain would allow for the conservancy district to obtain small parcels of land to establish catch basins or create a transfer station for dredging.

“It’s important to realize, too, the other 96 (conservancy districts) all have eminent domain,” Troyer said.

Indianapolis Yacht Club Commodore Lori Stadick said the IYC has given more than $30,000 to the Geist Lake Coalition, and that the IYC wants a clean lake but doesn’t support the proposed conservancy district as it currently stands.

“It is way too open-ended. The no property tax cap is scary for us. That can put us out of business if we can’t afford to pay (the tax),” Stadick said.

When they heard about the proposed Geist Conservancy District, several people who fish Geist raised concerns about the use of copper sulfate to eradicate weeds in the reservoir, and they believe it contributed to a recent fish kill.

“It’s my thought that this abundance of spraying and decay has led to what this fish kill was. The fish get stressed, and when the fish gets stressed, there’s umpteen bacteria already in water that can attach to these fish and kill them,” angler Josh McDermott said.

Geist Lake Coalition President Brian Hall disputes the claim. He said fish kills are natural and occur each spring. This spring’s fish kill, Hall said, was actually less dramatic than in past years. The copper sulfate used to treat the weeds is used on approximately 30 percent of the lake.
“It’s used for algae. (Copper sulfate) is used in fish farms to decrease the fungus on fish,” Hall said. “Algae removes oxygen from the water, and when you remove oxygen from the water, the fish starve for oxygen.”