You are at:Home»Current in Geist»Geist Community»Wife gives husband gift of life with kidney donation

When Geist resident Adrian Sanders was rushed to the hospital with a brain bleed, it was learned that not only would Sanders need brain surgery but also was suffering kidney failure.

“They suspect now that he had been living with kidney failure and the pressure from all the fluid buildup in his body had caused the bleed in his brain,” his wife Brittney Sanders said. “When I finally got to see Adrian, he was lying unconscious in the bed hooked to machines. They told me they didn’t know what would happen but that if/when he woke up, he would need brain surgery and dialysis very soon.” 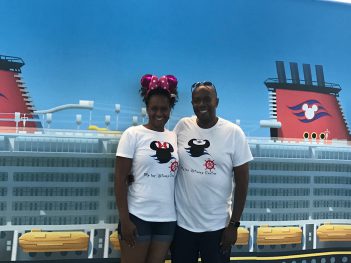 Brittney said Adrian started dialysis but she asked about a kidney transplant and learned the wait could be very long.

However, Brittney volunteered to be tested.

“I was very shocked. We both were as well as our families,” Brittney said. “The transplant doctors told us that it was not likely I was a match and urged us to look at his family members. They encouraged me to still be tested but said that family members are the best options for a match. They explained that it was more than just blood type but about if our cells were compatible. It was a very surreal feeling when we got the call to say I was a perfect match.”

Adrian, 40, received the kidney from Brittney, 40, in January 2017 at St. Vincent Indianapolis. It was exactly one year after he was rushed to the emergency room.

“I can never say enough great things about the transplant team. The amount of education, guidance and support they gave us was unreal. I had my own team, even though I felt like I wasn’t the sick one, he was,” said Brittney, who actively supports promoting awareness about the living donor program.

“I never in a hundred years thought she would be a match, of all people,” Adrian said. “She was very selfless in going to in to see if she was a match, and I feel it was a miracle that she did match. Just shows she truly is perfect for me.”

The couple has two daughters, 13 and 3 years old. Brittney said they had to rely on family and friends to help while they both recovered following the surgery.

“But to know that I have given him something so special, which is a better life for himself and our family, means the world. When we took our wedding vows, I said, ‘Through sickness and in health and for better or for worse,’ and my actions shows that I meant that,” Brittney said.