Franco Bippus, a Fishers resident who is a senior at the Indiana School for the Deaf, was one of five Marion County senior high school boys basketball players who received a Downtown Indianapolis Kiwanis Boys Basketball Academic All-Star Scholarship. The award, announced March 22, honors five senior boys who have earned the highest academic achievement based on a combination of grade point average, SAT/ACT scores and class rank. 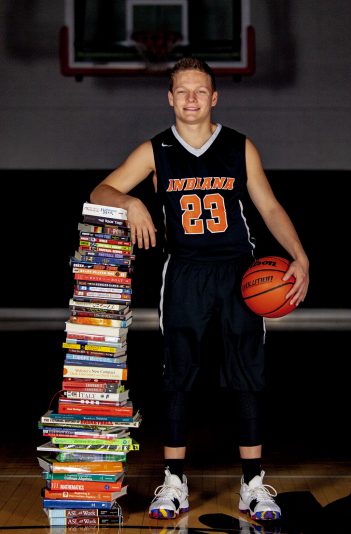 Bippus, who ranks No. 1 in his class, has played basketball most of his life.

“I have been playing basketball since kindergarten at the YMCA. I love the fast-paced thrill of basketball and making plays to set my teammates up to score,” he wrote in an email to Current.

Bippus balances his love of basketball with the demands of school work.

“I am the valedictorian of my senior class at Indiana School for the Deaf with a 4.0 G.P.A. I also attended the Hamilton Southeastern Schools full time when I was in fifth and sixth grade,” he stated. “From seventh grade thru the junior year, I was a part-time student there. This year, I decided to be a full-time student at ISD.”

“I will be attending Gallaudet University which is the only deaf university in the world,” Bippus said. “I will be studying law with aspirations of being a civil rights lawyer for the deaf community.”

Bippus received a $1,000 scholarship that recognizes the importance of academic excellence in athletics.

His parents are proud of his academic and athletic achievements.

“Since he was a young kid, he has enjoyed reading, discussing and talking about anything to satisfy his appetite for learning,” his father, Brian Bippus, wrote in an email to Current. “We knew his academic aptitude will be outstanding when he gets older. He strives to do his best in and out of the classroom. We are thrilled and beyond proud of his accomplishments and are very optimistic about his future endeavors.”