But to establish the setting for his latest book, “Tuyet,” Thompson did not have to stretch his imagination. Rather, he drew from firsthand observation during his military service in Vietnam. 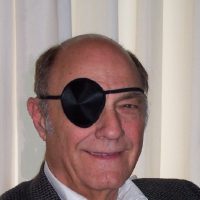 A work 14 years in the making, “Tuyet” tells the fictional story of a Vietnamese woman who, forced into prostitution by the exigencies of war, escapes to the United States seeking a new life and happiness that she may — or may not — find.

“I was an advisor to the Vietnamese Air Force at Bien Hoa Air Base from August 1971 to September 1972,” said Thompson, a retired U.S. Air Force Lt. Colonel. “My boss had a Vietnamese mistress, a very beautiful woman he loved very much. I often wondered what drove her into prostitution and what might happen if she managed to get to America when the (North Vietnamese) communists took over.

“This book is my speculation about those events.”

Thompson, who retired from the Air Force in 1980 and worked nearly 20 years in the private sector, recently self-published the book through Amazon. The novel is his seventh overall and the first written under his real name. He published his first six books under the pen name M.L. Hollinger.

A Carmel resident since 1980, Thompson, 83, is an aeronautical engineer who spent much of his career in the military space program. He was a project officer on the Titan III space booster and was a liaison officer to NASA on the space shuttle program.

Thompson began writing in 1999 — first short stories and eventually novels — when he retired from the private sector. He has three more books in progress.

“I enjoy creating the characters and their stories,” said Thompson, a Purdue graduate who joined the Air Force in 1957. “I like to feel I am giving readers something they will enjoy.”

Thompson’s first two novels, “Adventures of Regen the Bremen” and “Josh and the Cargan,” are science fiction. They are available at the Carmel Clay Public Library and the All Things Carmel gift shop. His next three novels, “Maushad,” “Love and War” and “Queen of the Gorgos,” are part of a fantasy/adventure trilogy. His sixth novel, “Josh Marin Space Commander,” also is science fiction.

All of Thompson’s books are available on Amazon.com.