You are at:Home»Current in Carmel»Carmel Community»Carmel Sprint Triathlon returns April 28

In Nicole Bills’ view, the Carmel Sprint Triathlon is a great event for triathlon newcomers.

Bills coordinates the event with the help of Don Carr from Tuxedo Brothers Event Management. 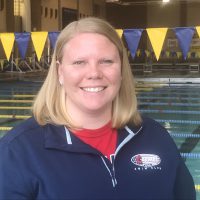 “I would say it is a popular event for a beginner triathlete, but it is one of the smaller triathlons in the area,” said Bills, aquatics director of the Carmel Aquatic Center at Carmel High School.  “It is the first triathlon of the season and still in April, so it can be cold. We are also a pool swim rather than an open-water swim. This event is an ideal sprint distance triathlon for beginners looking to enter the world of triathlons and for experienced triathletes looking to have fun and tune-up for the season ahead. The event and atmosphere is youth-friendly and is a great opportunity to introduce kids to the sport.”

The 14th Carmel Sprint Triathlon, hosted by the Carmel Swim Club, is set for 9 a.m. April 28. The race includes a swim, bike ride and running all in and around CHS.

Bill said she is preparing for approximately for 600 participants.

“In the past three years that I have been the coordinator, we have had between 484 to 536 people participate,” she said.

Bills said many para-athletes use the race to qualify for bigger races.

“We have had several who use the special wheelchairs and bikes to complete the race,” she said.

Awards are given to the top three female and male finishers in the adult race and other age divisions.

For more, visit tuxbro.com under triathlons. There is no race day registration.