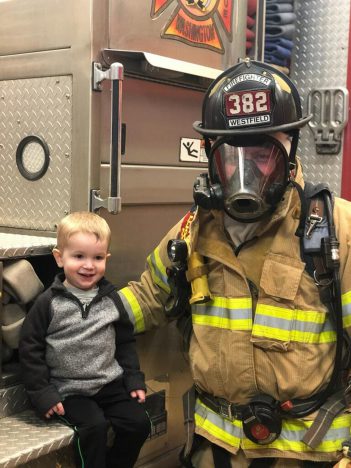 “We need to raise $50,000 in order to provide a patient’s room at the children’s hospital,” Rush said. “It will be a firefighter-themed room. Several other rooms are decorated. There’s racecar, basketball, football rooms. There are 25 different rooms with different themes, and it has been proven that they actually improve the children’s health,their mentality. It decreases the length of their stay. It’s very beneficial for them to have uplifting rooms versus your traditional institutional-type of hospital rooms. It helps the kids.”

Rush wants to involve as many firefighters and fire departments as possible.

“It’s not just Westfield or Hamilton County fire departments,” he said. “It’s about the fire service.”

Rush learned of the themed rooms because his fiancé, Jennifer Timme, is a physical therapist at Peyton Manning Children’s Hospital.

“There’s an assortment of décor they allow us to put in there, whether that be tools or hoses or gear. We are going to try to put anything we can that they’ll allow us,” Rush said. “It’s just one of those things (where) we deal with kids all the time. We go on runs for kids, we take kids to the hospital, we take kids to Peyton Manning (Children’s Hospital.)”

For more or to donate, visit give.stvincent.org/firefighter-room.