You are at:Home»Current in Fishers»Fishers Community»Kaps to challenge George for Southwest District council seat

Fishers resident Adam Kaps has a passion for supporting small businesses. That’s one of the reasons he’s running against incumbent David George for the Fishers City Council Southwest District.

Kaps and his wife, Kayla, moved to Fishers three years ago. 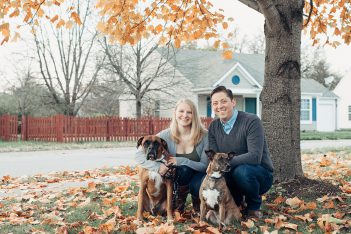 Adam Kaps with his wife, Kayla, and their two dogs, Marly and Zivah. (Submitted photo)

“We chose to live in Fishers because it’s a really close-knit community, and we felt their was an air of recognition with the importance of advocacy, and inclusion in the community was prevalent,” Kaps said. “There are a number of small businesses we loved to go to, Fishers felt like a modern city but with small businesses that were thriving. Seeing all the new projects pop up and the Nickel Plate Trail and the new development with First Internet Bank, all those are good things, but they’ve driven up real estate prices and small businesses have to struggle to be there.”

Kaps, who works as a marketing consultant, said he wants to support small businesses as much as possible, but that’s not the only issue he plans to address if elected .

“I think we really need to focus on improving our infrastructure system. With the rapid growth, we need to be able to accommodate that, and part of that includes adding and finding a way to alleviate I-69 traffic,” he said.

The Kaps live in Fishers with their two dogs.

“I saw things changing in Fishers and thought it was time for me to serve others best as possible,” he said.