Duke Energy Director Ryan Harbaugh presented plans for a sixth Duke Energy electrical substation in Carmel. The substation will be on Rohrer Road near Ind. 31. Harbaugh said the new substation is necessary because of increased electrical traffic in Carmel, which has left the city’s other five substations operating above capacity for months.

Harbaugh anticipates the project will be complete by June 2020, saying that “by next summer, the current system couldn’t handle another summer.” The substation will be above-ground with greenery planted to help mask its appearance.

Carmel Clay Parks and Recreation Director Michael Klitzing presented an update on the development of West Park, which included photographs of a new, 8,000-square-foot pavilion under construction. The pavilion will be complete by the end of April and begin hosting summer camps this year.

Forty acres of West Park’s wooded area, called The Groves, is under development. An open-concept playground area will be added to The Groves, while West Park’s existing playground and splash pad will be replaced with updated equipment. West Park’s renovation is part of the parks department’s five-year master plan, which includes renovations to Central Park, Meadowlark Park and Carey Grove Park.

Carmel Clay Public Library Director Bob Swanay gave an update on the West Library Branch under construction at 12770 Horseferry Road in the Village of West Clay. The building, which was originally a grocery store, is being renovated to include meeting spaces, an enclosed patio, a mezzanine level and modular shelving. The branch is expected to open sometime this year.

Roundabouts on the way

Brainard, who joked that he couldn’t give a talk without mentioning roundabouts, told attendees that Carmel has 122 roundabouts, which is more than any other U.S. city. A handout showed that in 2018, Carmel residents had a lower risk of sustaining injuries in a car accident than those living in areas like Indianapolis or Noblesville. Brainard attributed it to the city’s roundabouts, saying city officials had “created one of the safest places to drive imaginable.” Seven more roundabouts will be under construction this summer, including three on 96th Street and at least one on Main Street. 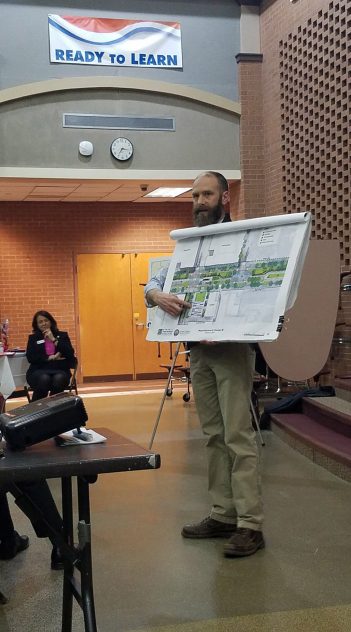 City Engineering Administrator Josh Kirsh described several upcoming construction projects for the spring and summer. These include continued work on the interchange at 96th Street and Keystone Parkway and updates in Midtown, which include art installations, a playground and a stage for outdoor shows. By the project’s end, Kirsh said Midtown will be “a beautiful, landscaped place to hang out.”

Carmel Fire Dept. Chief David Haboush, along with Community Liason Capt. John Moriarty and CPD Chief Barlow, provided information on the Specific Needs Registry. The program allows members of the public with specific medical needs to voluntarily register with the fire and police departments. Officers will then know how to best assist these people, should they ever be dispatched to their residences. Registration lasts for 12 months and may be continually renewed.

“We want to make sure that we are best serving all the residents of Carmel,” Moriarty said. “This is an opportunity to take a proactive approach.”