“I’m just glad I got a ring, now I don’t have to hear all that back talk at the kitchen table,” Heady said.

His father, Scott, captured Class 4A state titles Carmel’s coach in 2012 and 2013 before leaving to take the Marian University job in 2017.

Making it even sweeter, Heady said, was the fact some critics didn’t view No. 1 Carmel as the best team.

“All year we’ve been getting doubts,” said Heady, who will play for Marian next season. “We’ve had people say we don’t have a hard enough road (in the tournament) to get here. Right now it feels good to prove all those people wrong.” 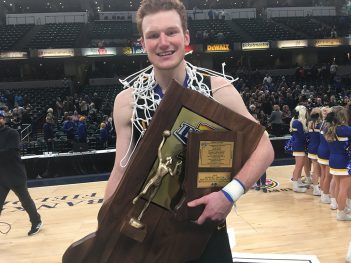 Senior forward John-Michael Mulloy has heard the negative chatter, too.

“Coming from Carmel, there are lot of people that you can say really don’t like you, and we don’t let that bother us,” the Butler-bound Mulloy said. “We always stick to what Carmel is all about and that’s playing hard, playing right, winning and competing. That’s what we did (in the final).”

The Greyhounds lost to Warren Central 54-48 in last year’s Class 4A state final.

“Not just me, but everyone said we would be back after that loss,” Mulloy said. “It’s been an amazing journey to get back and finish. It’s something I’ll never forget.”

Mulloy, who averaged 14 points and eight rebounds per game, was named the IHSAA Class 4A Mental Attitude Award winner.

Joining Heady and Mulloy as senior starters are Andrew Owens and Karsten Windlan, son of ex-CHS girls basketball coach Tod Windlan, who is now at Greencastle. The fifth senior was reserve Ben Frische.

“Everything we try to embody in Carmel basketball, the senior class gave us this year,” Greyhounds Coach Ryan Osborn said. “To finish this like they did makes me so happy for them. This group did a good job of focusing on the next one. You know it’s never going to be easy.  To prepare and win each week says a lot about this group.”

“They have high basketball IQs. They’ve been around basketball for a really long time,” said Osborn, who was an assistant under Heady for six seasons. “They know what it takes to win games. I’m proud of them.”

Freshman Pete Suder led four Greyhounds in double figures with 14 points against Ben Davis. That was well above his 6.0 scoring average entering the game.

“He was unbelievable,” Osborn said. “He had fun doing it. It’s fun to watch. I’m going to enjoy coaching him for another three years.”

Windlan and Owens, who will play for Findlay (Ohio) next season, averaged just under 12 points per game for the Greyhounds, who relied on balanced scoring and solid defense en route the school’s fourth boys basketball state crown.