Zionsville Community High School student Reed Dodson, 18, has been charged with sexual battery and rape from an incident that allegedly occurred last year. 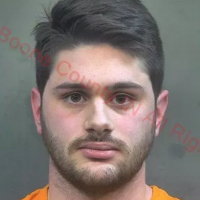 She stated she was at her home when a friend called to say two of her friends had been drinking at Dodson’s house and needed assistance. She and three friends arrived at Dodson’s house sometime after midnight and found Dodson also allegedly intoxicated.

Soon after their arrival, one of the intoxicated friends apparently drove off in his vehicle. Concerned for his safety, the group tracked the person’s location with a phone and then drove there, bringing Dodson along.

When they got near the residence, Dodson and the alleged victim exited the vehicle to search for the friend on foot while the rest of the group drove off.

The victim says the assault occurred alongside the road. Reed allegedly began to kiss the victim, who told him “No.” She said Dodson then pinned down, disrobed and raped her but stopped when he saw approaching headlights. She reported the incident to her friends shortly after returning home, then to the police two days later.

Reed sent a text message the following day apologizing to the victim, but later told the police the sex was consensual.

A jury trial has been scheduled Aug. 19 at the Boone County Courthouse.