Allen Elsesy, executive chef at Rose Senior Living in Carmel, is no stranger to intense competition. Over his 40-year culinary career, he has worked in prestigious restaurants, participated in various competitions and won multiple awards. 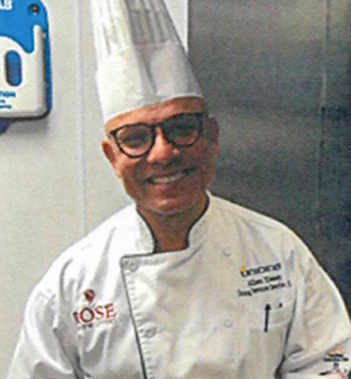 But according to Elsesy, his most recent award—Chef of the Year, given by the American Culinary Federation—holds a special place in his heart.

“With the Chef of the Year award, I was nominated by other professional chefs just like me,” Elsesy said. “It’s meaningful because they work as hard as I do, they work long days, and for them to recognize me, it’s just fantastic. It’s an honor.”

Elsesy, who was classically trained in Europe and has worked in three Michelin Star restaurants, first decided to turn his culinary attention to the healthcare industry after the birth of his son.

“In 2007, I had a son who was born. I wanted to find something that I could really spend time with him. Most chefs, based on my experience, work an average of 65 to 75 hours a week. You miss a lot of family, weddings, stuff like that—you just can’t go, you’re busy,” Elsesy said. “I said, ‘if I do that, what’s going to happen to my son?’ I want to have time with him.”

Elsesy began working at Robin Run Village, a Senior Living Community in Indianapolis, in 2007. In March 2018, he became executive chef and director of food services at Rose Senior Living. Elsesy said that he brings the same level of excellence to his current kitchen as to every fine dining kitchen he has worked in.

“Everything is fresh. I want to grab something the same day, finish the sauces the same day, and it goes straight onto a hot plate and serve it the same day. Because I believe there is no other way,” he said. “People deserve quality.”