When Carmel High School graduate David Owens stepped onto the stage of “The Voice” for the final night of the March 18 blind auditions, he said a prayer and tried not to think about breathing. 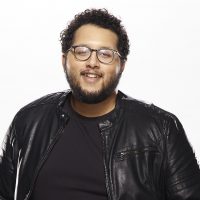 Then the lights dimmed, and the first notes of Bonnie Raitt’s “I Can’t Make You Love Me” filled the air.

“It was a unique intro because it’s really short, just a few notes, so I had to make sure I was really comfortable with it,” Owens said. “I knew I had to trust myself and that it was now or never and just do what I had practiced.”

Then, a chair turn by judge Kelly Clarkson, a show of approval that guaranteed Owens would make it to the battle rounds.

“It was kind of distracting. I was thinking ‘Oh, my god, that is Kelly Clarkson.’ So, I was thinking about her and not the song, so I needed to focus again on executing it,” the 25-year-old Owens said. “I told myself before it started (that) I was going to leave everything out there on the stage, so I made sure I gave it everything I had, and if the other judges don’t turn around, they don’t turn around. I was already on the show.”

“In your head you’re going, ‘Oh, please, let a chair turn,’ and so once it did, I didn’t care what happened after that,” she said. “I think at that point if anything else didn’t happen, if no other judges turned their chairs, I knew the door hadn’t closed, his journey would continue.”

Owens’ journey began as a young child singing around the house with his six siblings. He also sang at church and eventually joined the choir in eighth grade. He later became a member of the Ambassadors show choir at CHS.

“All I wanted to do was sing. It was absolutely my passion,” Owens said. “I was looking at potentially going to school for that, and in that process it hit me that what if something happened to me and I couldn’t sing again?” Owens said. “If I get in debt to have a music degree and can’t use my voice again, where would I be?”

Instead, he pursued another passion, storytelling and journalism.  He graduated from Indiana University in 2016.

“It was a tough decision to make at 18 years old,” the Indianapolis resident said. “So, luckily by the grace of God, I have this opportunity to still pursue (music).”

Owens’ audition was taped in November 2018, shortly after the birth of his son, Emmett. His son and his wife, Kayla, were on his mind as he prepared to sing for the judges.

“This is my dream I’d put to bed so many years ago and I want my son to feel validated one day that his dad went after his dreams,” he said. “When he goes after his dreams one day, I don’t want him to see me as an example of falling on my face but taking my dream seriously and putting in the work.”

Although winning “The Voice” is the goal, Owens said the bigger goal is to be true to himself.

“And to be supportive of the incredible artists on this show,” he said. “I’ve become friends with a lot of them and, my god, they are so gifted and talented and just incredible people. I just want to soak it up. I don’t want to leave feeling worried about what I could have done differently, but knowing I did my best and shared the stories I was given to share.

‘The Voice’ gives you a platform with one of the largest audiences in the world, so I want to enjoy that and be appreciative.”

Up next for Owens and his fellow competitors are the battle rounds.