You are at:Home»Current in Zionsville»Zionsville Community»Zionsville Mayor Tim Haak highlights streets, parks in State of the Town

“What everyone wants to know is streets. It’s the most popular department with projects,” Haak said. “Each year we are spending more and more in our street budget. I say that every year, and it’s true. When I first came on town council in 2008, our annual repaving budget was $200,000. This year alone with resurfacing, I think we are close to $2 million probably, and if you add in new road construction, we are at $15 million we are going to spend this year.” 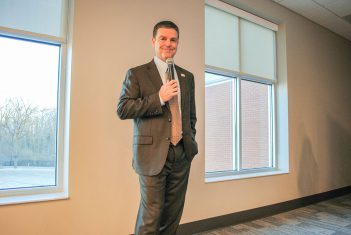 Mayor Tim Haak presents the annual State of the Town at the Zionsville Chamber of Commerce Business Breakfast March 18. (Photo by Anna Skinner)

Upcoming street projects for 2019 include a stormwater project along Oak Street to eliminate street flooding. Zionsville Road will close April 1 and remain closed through November to allow for widening the road from a two-lane configuration to three lanes between Technology Center Drive and 106th Street.

Haak said the complete closure was decided for several reasons.

“It shaves about two months off the project and saves close to half-a-million dollars on the project as well,” he said. “You get a better project, construction-wise.”

Haak touched briefly on the new municipal facility and Zion Nature Center that is in the design phase.
“The town purchased the former Rail Trail gardens property on 875 near the high school sports complex. We owned 10 (acres) and now we have an additional 15,” Haak said. “We are relocating our street department and parks department out there into their own buildings.”

The new building will have an outdoor learning space at the new nature center and public restrooms on the Rail Trail.

Haak explained a grant the town recently applied for through the Next Level Trails grant program. The application was for a $2 million grant to fund an additional 1.78 miles of the trail.

“We are working on finishing our portions of the Big 4 Trail, both south and north. We want to connect it down to Zionsville Road and we want to connect it to Whitestown,” Haak said. “It’s a fairly concerted effort now through a lot of cooperation at the county level, for sure, but also at the state level. The governor has the Next Level Trails program, and we applied for it. We think we are being strongly considered. The state calls us a couple times a week now for clarifying questions. That means they are seriously reviewing us and it will be a huge asset not just for us but for the county.”

Out of $25 million available for the Next Level Trails grant, more than $144 million has been applied for by municipalities.

Haak updated the community on 2018 public safety numbers and recent updates within the police and fire departments.

The Zionsville Police Dept. provided body cameras and new in-car cameras to each officer. ZPD placed five school resource officers in Zionsville Community Schools, and 4.41 tons of drugs were collected in 2018 as part of the Drug Take Back program.

On the fire department side, Haak said the ZFD added five emergency warning sirens in 2018 and responded to 2,400 calls for service. More than 400 people were trained in CPR. He also gave an update on Fire Station 92 improvements.

“After we moved into that building, we found it wasn’t quite big enough for the complete operations of our fire department. They needed some additional locker room space and equipment storage space,” Haak said.