Hamilton County Tourism President/CEO Brenda Myers is bullish about the future of the White River.

“White River is central Indiana’s next frontier,” Myers told a OneZone audience March 13 at the Forum Conference Center in Fishers. “It’s timeless and contemporary. The river sets us apart as communities who can work together to realize big dreams. It supports healthy neighborhoods and economies. It honors the past and improves the lives of Hoosiers for years to come.” 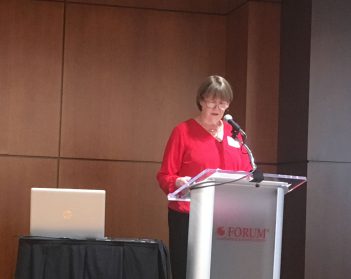 The White River Vision Project is a collaboration between Indianapolis and Hamilton County Tourism in partnership with Indianapolis’ philanthropic arm, Tourism Tomorrow.

The plan is to enhance the 58 miles of the White River in Marion and Hamilton counties. Myers said more than 100 people are serving on task forces.

Myers said the project is nearing its action phase, testing ideas from the last nine months.

There are nine guiding principles, which are listed on the website, mywhiteriver.com. The chief one is restoring the river’s environment and ecology to enhance its natural function.

“Another is to watch that river health closely. Who wants to get into a dirty river?” Myers said.

Another is to increase year-round activities to attract people to the river for arts and entertainment, recreation and learning.

“There are so many stories about people who lived on the White River in early times,” Myers said. “These stories need to be told.”

Conner Prairie President/CEO Norman Burns said there has been a lot of discussion about how Conner Prairie takes advantage of the resource of 3.3 miles of the river running through the property.

“In our master plan, we have 7 miles of new trails with several access points across the river,” Burns said. “That’s just one element where the White River is part of the master plan.”

“There was an ordinance that factories and rivers be located on the river — the oil canneries, the slaughterhouses and meat packing facilities,” Mack said. “By law, they were required to dump all of their industrial waste into the river. Although there weren’t a lot of autopsies done at the Central State Hospital, there was actually a drain that went from Central State Hospital into the White River. By 1915, the river was so disgusting, so polluted that a state senator went to the Statehouse and said it was ridiculous (Indianapolis) has to build a sewer system.”

“So (that) when we have flood events, we’re literally not dumping raw sewage into the river,” Mack said. “So by 2025, we have this amazing opportunity in Indianapolis. For the first time in Indianapolis history, we will be able to engage and embrace the White River like we never have before.”