The Indiana General Assembly recently reached its halfway point, meaning all the bills passed by the Senate will now be considered by the House of Representatives and vice versa.

The Senate introduced 636 bills this year, and of those, 218 passed. Of the bills that passed, 125 received unanimous support and 195 received bipartisan support. During the next few months, the Senate will discuss 201 bills coming from the House. 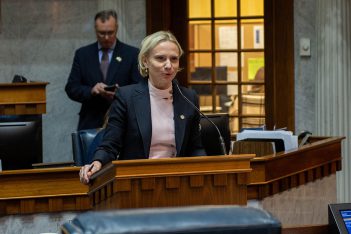 Below are bills I authored this session that recently passed the Senate:

Senate Bill 407 would establish the Economic and Regulatory Policy Task Force to address the long-term fiscal health of the state, improve legislative oversight and reporting, enhance internal controls and audit procedures, increase transparency and simplify the regulatory environment of small businesses in Indiana.

Senate Bill 546 would establish the Education Task Force to assess the governance structure of K-12, higher education and workforce development systems in Indiana as well as decrease regulations and streamline education reporting.

Senate Bill 547 would urge the Legislative Council to task a summer study committee with studying best practices for K-12 education, reassessing science education based on a deeper understanding of subject matter, improving mathematics, geography and personal finance education and adding entrepreneurship to the K-12 curriculum.

Senate Bill 549 would require school superintendents to submit a financial indicators report (dashboard), created by House Enrolled Act 1315 in 2018, to the school boards. It would also urge the Legislative Council to assign a summer study committee to study the oversight and governance structure of tax increment financing as well as reporting mechanisms between local government units.

Senate Bill 596 would allow the Indiana Supreme Court to expand the Youth Assistance Program for at-risk youth and families.

Senate Concurrent Resolution 16 would urge the Legislative Council to task a summer study committee with assessing the laws and policies concerning the adjudication and rehabilitation of juvenile offenders.

A number of other important bills, authored by my colleagues, also passed out of our chamber during the last few months.

Senate Bill 2 would work to increase school bus safety in our state.

Senate Bill 12 would provide a bias-crime protection for all Hoosiers.

Senate Bill 33 would establish a grant fund to support the establishment of comprehensive addiction recovery centers, which would offer a full range of treatment options to those struggling with drug abuse.

Senate Bill 233 would target tax relief for small businesses by doubling the personal-property tax exemption from $20,000 to $40,000.

Senate Bill 362 would expand the tax credit for Hoosier teachers.

Senate Bill 516 would authorize hemp production in our state by allowing Hoosier farmers to seek a license to grow non-intoxicating hemp. This would create a new cash crop for our agriculture industry.

Senate Bill 519 would create stronger penalties for professional drug traffickers by allowing prosecutors to “stack” the amount of drugs dealt in a 90-day period.

Senate Bill 552 would authorize sports wagering as well as other gaming changes.

If you would like to discuss these or other bills moving through the General Assembly, contact me at Senator.Spartz@iga.in.gov or 800-382-9467.