You are at:Home»Current in Fishers»Fishers Community»Fishers Plan Commission in favor of the Stations at Fishers District 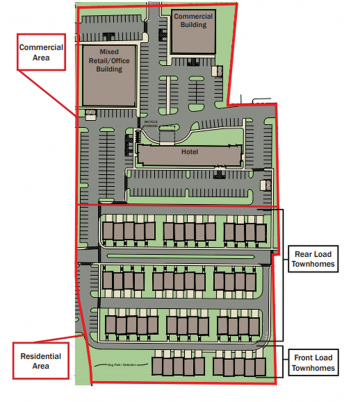 Director of Planning and Zoning Tony Bagato presented on the 8.67-acre project.

The project will create vehicular and pedestrian connectivity between The Yard at Fishers District and the Kroger grocery store to the west.

After Bagato’s presentation, Steve Hardin, a partner with Faegre Baker Daniels, presented on the project.

“This concept plan is a conceptual plan and not the final design. We are still working through the final shape of what the hotel will look like,” Hardin said. “The (property) uses aren’t going to change, but we will likely have some pushing and pulling on exactly how the hotel gets oriented.”

A dog park is planned for the townhome area, and Hardin said the location of the dog park and some landscape buffers may change if the hotel’s location changes.

“The townhomes may move down a little bit to accommodate the hotel,” he said. “Everybody is really excited about the project.”

With the plan commission’s favorable recommendation, the Stations at Fishers District proposal was scheduled to go before the March 18 Fishers City Council meeting. Results of that meeting were unable to be included in this story because of press deadlines. For more, visit fishers.in.us.